Home News Elections Our candidates are competent; I’m confident these are the winning lists –... 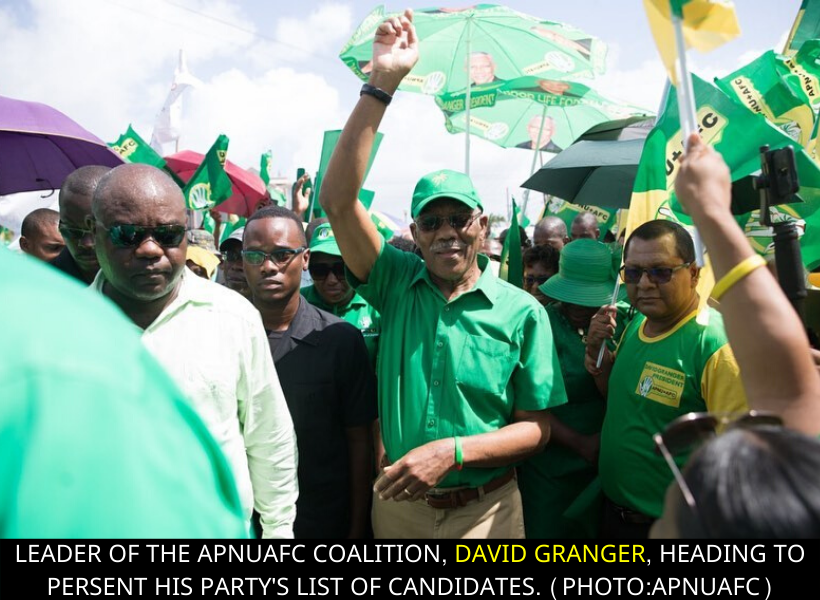 The A Partnership for National Unity + Alliance for Change (APNU+AFC) supporters came out in their numbers today to support their party as its leadership submitted nominees to the Guyana Elections Commission (GECOM) ahead of the March 2 polls.

Presidential Candidate and the Head of State, David Granger, in a statement to the media after the exercise, noted that the lists were submitted in accordance with Section 11 of the Representation of the People’s Act.

“I am confident that these are the winning lists,” he said, while noting that the nominated candidates do enjoy the confidence of party members and supporters.

“They have been found competent to lead in the National Assembly and in the Regional Democratic Councils. They reflect differences in age, ethnicity, gender, geographic and occupation,” Granger said.

He noted too, that the coalition has prepared its partners thoroughly for the elections, and that the nominated candidates, members and supporters are mobilized, as their campaign continues.

The Presidential Candidate said that he is confident that the electorate will re-elect the coalition in March, based on the party’s record over the past five years.

He reiterated his commitment to execute the plan called the ‘Decade of Development.’

“The APNU+AFC restored good governance over the past five years and has a plan to continue its good work over the next five…Revived local democracy and removed fear from our land. It has rebalanced the national economy and revived local village economies. We have a solid record of achievements. We will build on that foundation to catapult our nation to greater prosperity during the Decade of Development,” the APNU Party Leader said.

In closing, the politician noted that General and Regional Elections will determine the future of the Nation’s children.

“We shall ensure a secure future for present and future generations. We shall ensure that our country does not ever again fall into the wrong hands. We shall not gamble with your children’s future. The APNU+AFC is the right choice. The future is bright. Let us continue to move forward. We shall fulfill our promise to provide a good life for everyone,” he concluded.