Home News Today, GDF is fit for role; superior to what it was five... 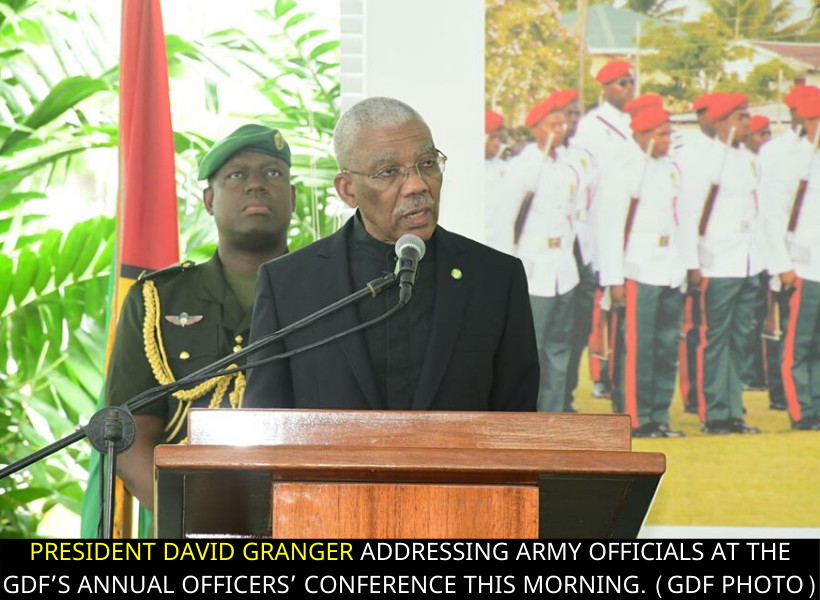 The Guyana Defence Force (GDF) is now “fit for role”, thanks to increased budgetary allocation, enhanced training and the acquisition of specialised equipment, says the Head of State, President David Granger.

The Commander-in-Chief of the Armed Forces was at the time addressing army officials at the GDF’s Annual Officers’ Conference this morning.

“The Defence Force today is fit for role. The promulgation of a defence doctrine, the strengthening of the technical corps, the pursuit of defence cooperation with friendly countries and the implementation and organizational restructuring have improved the Force’s readiness to respond to threats,” he said.

The president noted that there has been improvements in the technical corps, particularly the Air Corps, Engineer Corps, Signal Corps and Coast Guard, which have enhanced the Force’s agility and capability.

He reported that the Air Corps’ fleet was augmented with the acquisition of light reconnaissance aircraft, while the Signal Corps benefitted from the acquisition of new communications equipment and personnel training. The Engineer Corps would have received equipment to improve its responsiveness to climate hazards and promote greater stability and climate resilience in frontier communities particularly in the South Rupununi.

Granger noted too, that the Force’s recapitalization programme has been boosted by increased Central Government’s budgetary allocations.

Further, he noted that defence cooperation has allowed the Force to benefit from donations of equipment, training and participation in military exercises with friendly states. This has enhanced cooperation in combatting transnational crime and managing disasters.

The brigadier said that the Force’s policy for the augmentation of the Reserve has allowed the Militia’s personnel strength to grow from fewer than 125 members in January 2015 to nearly 1,500 in January 2020.

“The presence of the Militia in all ten Administrative Regions allows for swifter response to threats and emergencies, wherever and whenever they occur,” he said.

The president noted also, that the Force’s institutional reorganization policy helped to establish a more resilient architecture for the high command with the restoration of the appointments of Adjutant General, Inspector General, Quartermaster General and Commandant of the Militia.

“These changes allowed dedicated superior officers to pay undivided attention to discipline, recruitment and soldiers’ morale; to the improvement of soldiers’ living conditions; to the maintenance of a high state of operational readiness and to inter-operability with fraternal hemispheric armies and Caribbean Defense Forces and the mobilization and training of reserves,” he said.

The Force, today, is a superior organization to what it was five years ago, the president said.

“Public confidence in its capabilities has been restored. National defense, as a consequence, has improved. These improvements will continue over the next ten years,” the president projected.