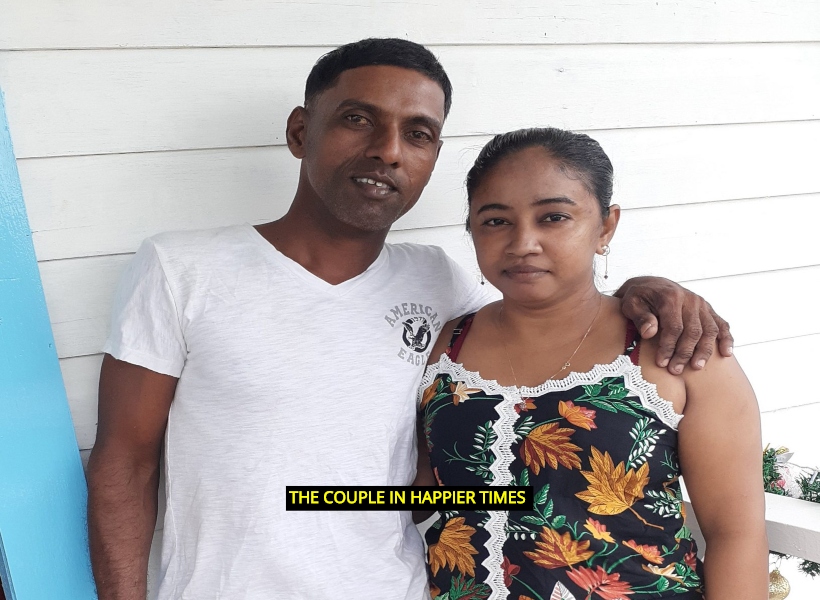 Nathram Lall, the man who ingested a poisonous substance early Wednesday after stabbing his reputed wife, Annette Ally, to death at their Crane, West Coast Demerara (WCD) home, has been discharged from the hospital and has since claimed self defense.

The alleged murder suspect, who was discharged from the West Demerara Regional Hospital yesterday, told the police that he was forced to kill his wife in order to save his own life.

The man alleged that the mother of his three children took her lover to their home to kill him. He however learnt of the plan and fatally stabbed her instead—of course, investigators are not buying his story.

Guyana Standard has been informed that police ranks received information that Lall became agitated after he found out that the deceased was dancing with another man at her brother’s residence.

It is being alleged that the victim was having a romantic relationship with that individual and Lall was said to be aware of this.

The suspect’s brother, Taijram Lall said that the affair between the victim and the other man started sometime last year when his sibling went to work in Barbados. However, the couple reconciled when he returned.

“They continued living together but they use to have a lot of problems. She does leave him and move in with the other guy for months and then go home back to her husband but then like he had accepted it because every time she left, he would just take her back,” Lall explained.

It is unclear what triggered the murder on Wednesday morning since the suspect was said to be aware of his reputed wife’s extra marital affair.

Lall will make his court appearance on Monday.