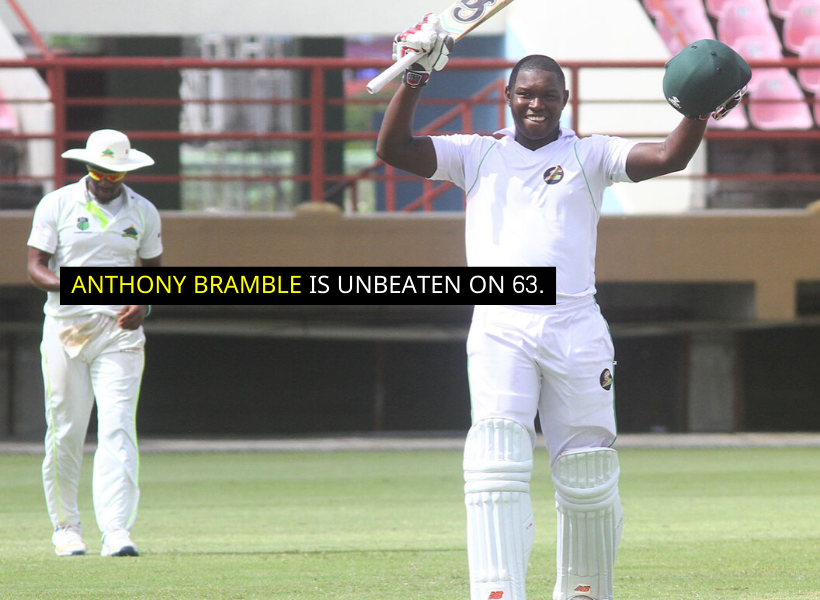 After the first day of play in their Cricket West Indies (CWI) Four-Day clash, the Guyana Jaguars ended on 263-6 batting first against the Trinidad and Tobago Red Force at the National Stadium, Providence.

At the close of play on Thursday, wicketkeeper-batsman Anthony Bramble was unbeaten on 63 (9x4s, 2x6s) along with Devindra Bishoo (10).

Earlier in the day, valuable half-centuries from opener Tagenarine Chanderpaul 68 (9x4s) and all-rounder Christopher Barnwell 58 (10x4s) helped the Jaguars stay in the game.

Chanderpaul shared an opening stand of 38 with fellow left-hander Chandrapaul Hemraj albeit just scoring a single. Hemraj was the first wicket to go for 36 (6x4s; 1×6) while captain Leon Johnson 20 (3x4s) followed after as the Jaguars went to lunch on 69-2.

Vishaul Singh (4) was dismissed soon after lunch to leave the Jaguars at 80-3 before Barnwell entered to compose an important 86-run partnership with Chanderpaul as the duo marshalled the Jaguars to 150-3 by tea.

However, Barnwell would fall to Darren Bravo with the score on 166, making way for Bramble who’s aggression coupled with Chanderpaul’s resilience added an 86-run partnership before Chanderpaul was finally dislodged.

Kevin Sinclair went for a duck bringing Bishoo to the crease and the Jaguars made it to stumps without further loss.

Bowling for the Red Force, Bryan Charles led the way with 4-2 while Darren Bravo and Akeal Hosein had figures of 1-17 and 1-65 respectively.