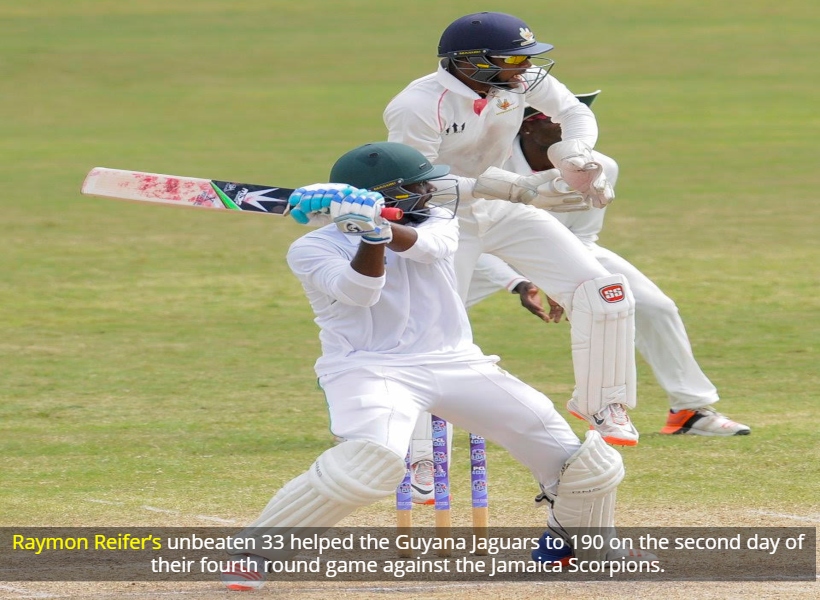 The Jamaica Scorpions fought back on day two of their fourth round encounter against defending champions Guyana Jaguars at the National Stadium, Providence, with their bowlers restricting the Guyanese side to 190 all out as spinners Patrick Harty and Jamie Merchant led the way with three wickets apiece.

On Friday morning, openers Tagenarine Chanderpaul and Chandrapaul Hemraj resumed the Jaguars first innings on 4 and 13 not out respectively but Chanderpaul could only add one more to his overnight total as he fell LBW to off-spinner Pete Salmon to leave the Jaguars on 32-1.

From thereon the Jaguars would never quite string together a solid partnership, after guiding the Jaguars to 53, skipper Leon Johnson would fall bowled by Derval Green for 6 and Hemraj would follow almost immediately after caught off the same bowler for 38 (3x4s).

Christopher Barnwell joined Vishaul Singh at the crease and together they took the Jaguars from 54-3 to 112 with a valuable 58-run partnership before Barnwell was bowled to become Merchant’s first scalp.

Singh lost his wicket in the same over and suddenly the Jaguars were on the backfoot yet again at 115-5; wicket-keeper batsman Anthony Bramble didn’t last long and was dismissed in the next over, LBW to Harty for just 2.

Kevin Sinclair (1) wouldn’t last long either and the Jaguars were in danger of being bowled out when he lost his wicket with the score on 119-7.

However all-rounder Raymon Reifer and tailender Veerasammy Permaul contrived to frustrate the Scorpions bowlers as they fashioned an eighth wicket stand of 65 with some sensible batting.

Eventually though, in the final session of the day’s play, Harty would bowl Permaul for 35 which included 6 fours from 35 deliveries; with the Jaguars on 184-8, this spelled the beginning of the end as Reifer ran out of partners. Nial Smith and Keon Joseph were both dismissed for ducks leaving Reifer not out on 33 (107 balls, 2xs and 1×6) and the Jaguars all out for 190.

The Scorpions in their second innings started off brightly with West Indies Test opener John Campbell particularly aggressive in his knock of 31 which included 2x4s and 2x6s, but Kevin Sinclair would trap him LBW to end the Scorpions opening stand of 49.

First innings leading wicket taker Permaul would then strike in successive overs, first he had Nicholson Gordon LBW for just 1. With the last delivery of the day, he had Jermaine Blackwood caught for a duck to leave the Scorpions on 50-3 at stumps with opener Assad Fudaddin not out on 13 (1×4).
The Jamaicans lead by 47 runs with seven wickets in hand and will resume their innings at 09:30hrs on Saturday.