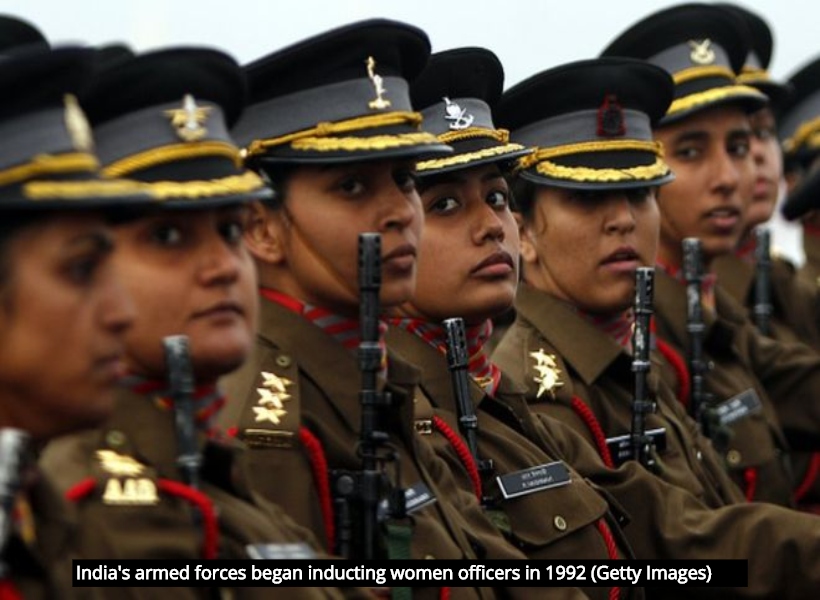 (BBC) – Last month, India’s Supreme Court appeared to nudge the government to consider lifting the military’s official ban on women in combat roles – and to give them commanding roles.

“Test them on [the] same footing as men. Do not exclude them [women officers] as a class. [A] change of mindset is required,” the court said.

Earlier this week, the government responded. Its lawyers told the top court that women were not fit to serve in ground combat roles. For one, male soldiers are not “yet mentally schooled to accept women officers in command”. Then there were the “challenges of confinement, motherhood and childcare”.

This, according to military historian Srinath Raghavan, is an “extraordinary and regressive” claim, reminiscent of the claims of colonial rulers that Indian soldiers would never accept Indian commanders. “Military training is about fundamentally reshaping norms and attitudes that soldiers bring from their social backgrounds,” he says.

India’s armed forces began inducting women officers in 1992. Over the decades, they have been given combat roles in the air force. Women have been inducted as fighter pilots and have flown sorties into combat zones; they will be inducted as sailors as soon as ships that can accommodate them are ready. Last year, a 24-year-old became the navy’s first woman maritime reconnaissance pilot.

The army is a striking exception. Women have worked here as doctors, nurses, engineers, signallers, administrators and lawyers. They have treated soldiers on battlefields, handled explosives, detected and removed mines, and laid communication lines. Women officers have also been given permanent commission – a 20-year service, depending on eligibility and rank. Last year, women were cleared to join the military police.

So they have ended up doing almost everything except combat roles: women are still not allowed to serve in infantry and the armoured corps. According to 2019 figures, women comprise only 3.8% of the world’s second-largest army – compared to 13% of the air force and 6% of the navy. There are some 1,500 female officers compared to more than 40,000 male officers.

All this, says Akanksha Khullar, a researcher at Delhi’s Institute of Peace and Conflict Studies, cannot really be considered a “milestone for women empowerment, as the doors have opened up with an extremely limited capacity”. India’s national security narrative, she told me, is “shaped, limited, and permeated by ideas about gender – with an overt masculine predominance and the structural exclusion of women”.

She says the gender disparities are “well reflected in institutional attitudes right at the top” and that “patriarchal notions are probably more ingrained in the army” than the other forces.

She’s correct. In 2018, former army chief and the current Chief of Defence Staff Gen Bipin Rawat told a news network that there weren’t any women soldiers serving in front line combat positions because “a woman would feel uncomfortable at the front line”.

He said maternity leave was an issue, women need more privacy and protection, and that India was not yet ready to accept “body bags of women” killed in combat. He also said that women need to be “cocooned” from the eyes of subordinate soldiers. Mr Rawat’s comments had sparked considerable outrage.

Around the world, getting women into combat roles has been a hard won battle. More than a dozen nations allow women in combat roles.

When women officially became eligible for combat positions in the American military in 2013, it was widely hailed as another step towards the equality of sexes. In 2018, the UK military lifted a ban on women serving in close combat ground roles, clearing the way for them to serve in elite special forces. At that time, critics pointed out that mixed-gender teams in close combat could lack cohesion, and there was some evidence that women are less likely to pass the tests and aerobic fitness.

“While some can argue that women, in general, may not be able to cope with the rigour of combat due to the sheer physical strength required, why deny the opportunity to those who can? In my view, the right of a woman to serve in any role in the armed forces must be equal to a man’s as long as the physical and qualitative standards are not compromised,” says HS Panag, a retired Indian general.

In other words, patriarchy should not come in the way of equality and common sense.