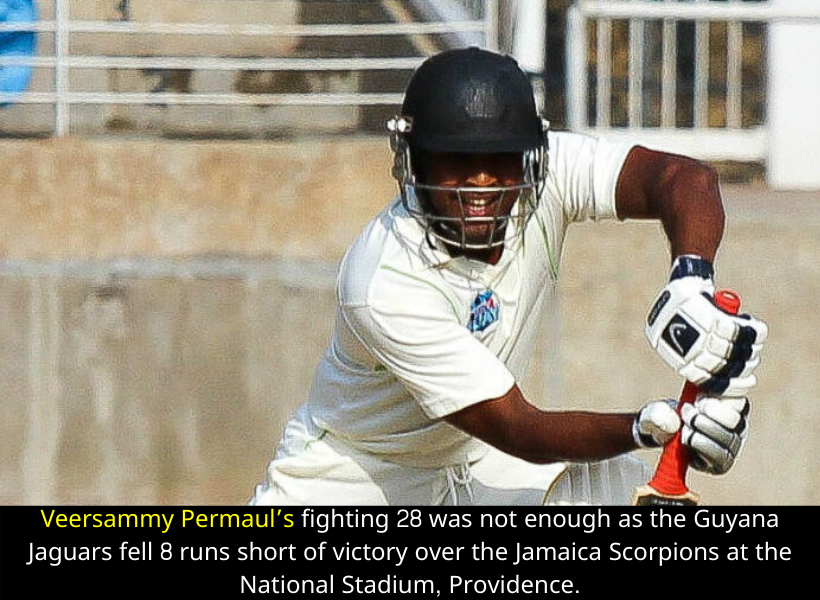 The Jamaica Scorpions fought back in stunning fashion to claim a thrilling 7-run win over defending CWI Regional Four-day Champions, the Guyana Jaguars.

Led by newcomer Pete Salmon’s 7-wicket haul in the second innings, the Scorpions needed only 9 Overs in the morning session of the fourth and final day of their fourth round encounter at the National Stadium, Providence.

Salmon, who was playing in his first match at the regional level, snared 7-57 from 25 overs to upstage Jaguars left-arm spinner Veerasammy Permaul with the ball, as the hosts, chasing 182 for victory, lost nine wickets before the close on the third day of the match in the fourth round of the Championship before being bowled out for 174 early in the fourth day.

When the Jaguars resumed on Sunday morning, last wicket pair Permaul and Keon Joseph were on 20 and five not out respectively, they needed 27 runs for victory while Jamaica only needed a wicket to wrap up proceedings.

They would get 20 of those runs before Permaul (28 from 103 deliveries, 1×4) was trapped LBW by Derval Green, bringing an end to the 44-run last wicket partnership with Joseph stranded on 8 and the Jaguars 8 runs short of victory.

Earlier in the game, Anthony Bramble led the way for the Jags with 32 and several others reached double figures, but failed to carry on.

The diminutive Permaul came to the Jaguars’ rescue and survived for a tense period of just over an hour until the close of play on Saturday.

Permaul had earlier been the pick of the Jaguars’ bowlers, ending with 6-50 from 26 overs for match figures of 10-84, when the hosts bowled out the Scorpions inside the first hour after lunch.

With this being their second loss in four games, the Jaguars will be looking to get their title defense back on track and will be eyeing a win against the Windward Islands Volcanoes with that match starting on February 13 in St. George’s, Grenada.