Home News ExxonMobil says local content use up by 77 %; offers no evidence... 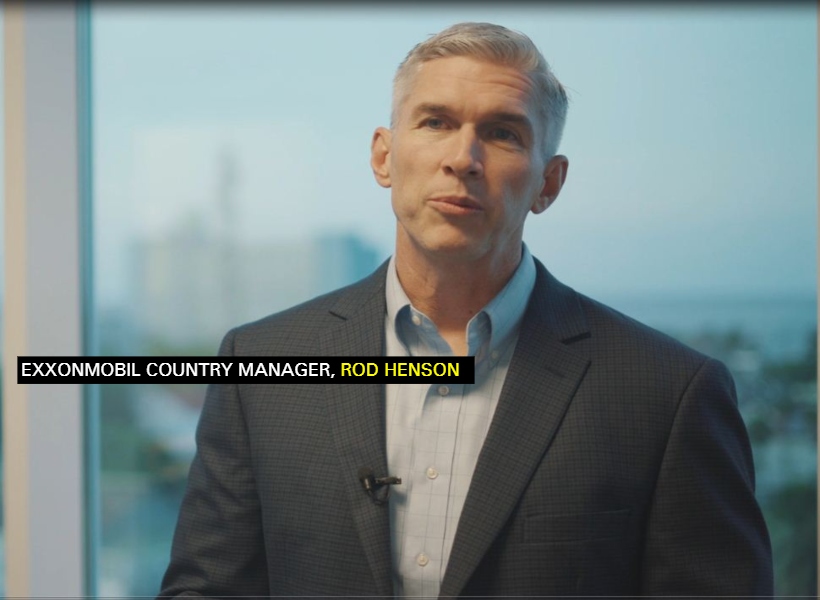 The Centre for Local Business Development (Centre) which was established by ExxonMobil almost three years ago, released an update to the public today which noted that the company’s use of Guyanese goods and services are up by 77 percent.

But with all the statistics and graphs it provided, not a shred of evidence was presented to justify its claim. The citizenry remains none the wiser about the names of the companies and persons who make up ExxonMobil’s significant local content achievements.

In fact, the first and only time ExxonMobil ever subjected itself to such scrutiny it was revealed that it counted snackettes, Stabroek and Bourda Markets, taxi services, and utility companies like the Guyana Revenue Authority (GRA), as part of its local content drive.

Be that as it may, ExxonMobil confidently stated today that the number of Guyanese supporting its exploration, development and production activities here has grown by 77% in 2019, now representing more than half of the total workforce. The company said that there are now nearly 1,900 Guyanese supporting the company’s activities.

Further to this, Exxon Mobil said that since 2015, it has expended $45.7 billion with hundreds of local vendors. In 2019, it said that more than $24 billion was spent directly on more than 700 Guyanese vendors providing goods and services ranging from food to engineering. Exxon said that this represents a 74% increase in expenditure compared to $14 billion spent with Guyanese vendors in 2018.

This manner of reporting by ExxonMobil, where no disaggregated information is provided to the citizens on its expenditure flows in the local economy, remains unchallenged by the relevant authorities.

In the meantime, ExxonMobil said that the Centre for Local Development has released a list of planned 2020 tenders to provide goods or services related to ExxonMobil Guyana and its prime contractors. Uploaded to the Centre’s Supplier Registration Portal, Exxon said that the list supplements ongoing efforts to provide Guyanese businesses information regarding upcoming opportunities available in the oil and gas industry.

Guyana Standard perused the Centre’s website for the list in question, and it unfortunately, could not be accessed by individuals who are not registered suppliers. ExxonMobil’s Public Relations Official, Janelle Persaud was contacted for the list but she did not have that information and subsequently directed the entity to check the website.

Commenting on the successes to date, ExxonMobil’s Country Manager, Rod Henson said that by using a multi-tiered approach, it focuses on building workforce and supplier capabilities as well as strategic community investments. Henson said, “Development of Local content is exactly what we want to see and the progress we have made is really remarkable.”

Henson added, “Continual and methodical development of projects provides additional opportunities for workers and suppliers and this workforce demand will remain and likely grow as businesses know that there is more work ahead…”

The Guyana Standard understands that planning is underway for a Supplier Forum later this year which will allow for direct engagement with ExxonMobil Guyana and its prime Contractors. The Centre held a similar forum in December 2018.

The Centre was established in 2017 to assist small and medium-sized Guyanese businesses build capacity and improve their competitiveness. Exxon said that to date, more than 2,100 Guyanese business are registered and in keeping with its mandate, the Centre has provided coaching and mentorship to more than 450 businesses. In fact, 15 Guyanese companies are receiving mentorship for ISO 9001 compliance, while four companies have been certified while one has reached compliancy.