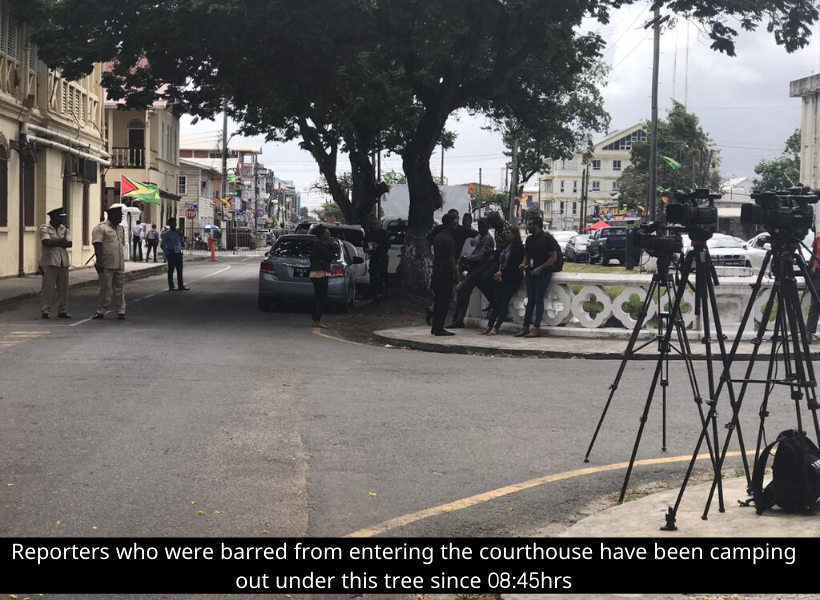 Only a reporter from the Guyana Chronicle, National Communications Network (NCN),Prime News and the Stabroek News were allowed entry into the High Court this morning for a hearing into an injunction barring the CARICOM-supervised ballot recount for the March 2 General and Regional Elections.

The matter was fixed for 09:00hrs before Justice Franklin Holder. Guyana Standard understands that the proceedings were held in the judge’s chambers and not in open court.

After allowing reporters from the aforesaid media houses to enter the court house, Marshalls and police ranks patrolling the court’s entrance, said they were just following instructions passed by the judge.

A court Marshall informed that they are only allowing one reporter per media house. But this is not the case, as no reporter from Guyana Standard, News Room, Kaieteur News, Demerara Waves, Guyana Times, News Source, MTV Channel 65 and Department of Public Information (DPI), were allowed entry.

In fact, these reporters are standing under a tree in front the court house sheltering from the sun. The court Marshall had promised to seek further instructions from his superiors as it relates to accommodating other reporters.

But, almost one hour later, he is yet to inform reporters on the way forward. Court Marshalls and police ranks have informed reporters that limited access is being allowed to the courthouse amid COVID-19 outbreak.

It would appear that Justice Holder is hearing the matter as lawyers for the parties arrived at on time.

They have not yet come back downstairs. The reporters who are camping out under the tree have no other alternative but to depend on these lawyers to give an update on the case.

No provisions were put in place by the court to publicize this matter which is of national interest. In cases like these, Chief Justice Roxane George would usually make provisions for the public to listen to the proceedings.