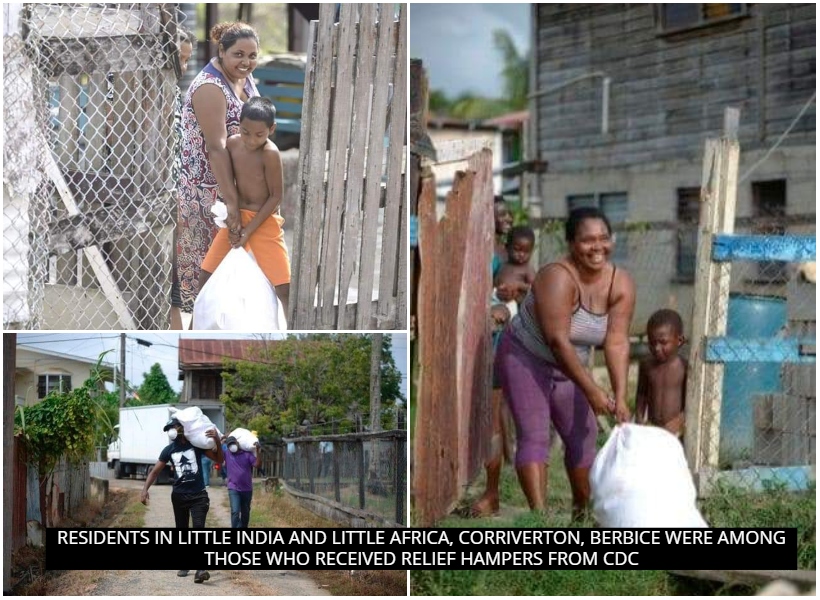 As the Civil Defence Commission (CDC) continues to work to bring relief to citizens and communities, which have been affected by the Ministry of Public Health’s measures in place to combat COVID-19, 1759 households in 25 communities from across five regions have already benefited from relief distributions.

Since the distribution commenced on April 5, 2020, communities in Regions 3, 4, 5, 6 and 10 have received the hampers, which contain a month’s supply of food items.

Senior Response Officer of the CDC, Captain Salim October said that the success of the exercise so far has been achieved through CDC’s careful coordination through the National Emergency Operations Centre (NEOC) with local Non-Governmental Organisations (NGOs), Governmental Agencies, Regional Democratic Councils (RDCs), Community Liaisons and some members of the private sector.

He noted that members of the private sector have been supportive towards the CDC’s efforts and they must be applauded while several NGOs have provided volunteers to have the hampers delivered door to door.

“The CDC recognises that for the entire nation to benefit and for efforts to be maximized requires broad-based interventions by as many organisations and entities as possible. At this juncture, the CDC recognises that similar initiatives to provide relief to citizens are being implemented by various organisations including NGOs, international and local agencies and individuals.”

He continued, “As the national authority for Disaster Risk Management, we are heartened by these wide-ranging, noble and humanitarian driven acts that no doubt will rebound to increased food security for many. The CDC, publicly acknowledges the supportive agencies and organisations, and applauds their efforts in mobilising support and conducting community outreaches. These efforts demonstrate our resilience as a people.”

Director-General of the CDC, Lieutenant Colonel Kester Craig said that while some citizens might believe that the Commission is moving too slow in its distribution efforts, they must be cognizant of the fact that while the Commission had the foresight to procure supplies beforehand, the situation has drastically changed from then to now. He noted that the entire world is grappling with the pandemic and therefore, it is a challenge to mobilise resources for which the entire world is competing.

In light of the challenges, the Director-General, therefore, noted that the CDC, in collaboration with key stakeholders conducted reconnaissance, assessments and analysis and the neediest and vulnerable communities were the recipients of the first batch of supplies. Further, distribution and procurement plans have already been developed to direct the process on the availability of the required resources.

“This is not to say that we are not trying our best. We have challenges and despite those challenges, we are still working to ensure that the citizens are taken care of during this time. We have tried, as far as practicable, to touch those communities which are most vulnerable and who would be most impacted during these measures. However, our intention has always been to ensure that every vulnerable citizen benefit so we are trying to work out those challenges,” he said.

Lieutenant Colonel Craig added that the CDC has noted that several public and private entities and individuals are coordinating similar distribution interventions across the country. It is recommended that all distributions be coordinated through one system to avoid duplication of efforts and to maximise resources.

“The CDC stands ready to work with government, non-governmental, private sector and other agencies to coordinate a comprehensive distribution effort which reaches the entire vulnerable populations,” the Director-General added.

He also said that this partnership could be activated by donating supplies directly to the CDC, joint distributions in the communities or sharing of logistics and distribution information.

“At minimum, the CDC would be appreciative if organisations which are engaged in their own distribution activities can inform us ahead of time so that such efforts can be factored into our national distribution planning. We are confident that your assistance in this regard would help to mitigate the duplication of relief efforts as we respond to the challenges and impacts of COVID-19. Kindly contact the National Emergency Management System (NEMS) at 600 7500 or 623 1700 to update us on any relevant information. We welcome your continued partnership and support,” he noted.

Meanwhile, the CDC has donated a supply of masks to frontline agencies such as the Diamond Diagnostic Centre, Georgetown Public Hospital Corporation, Immigration Department and the Guyana Revenue Authority to ensure that adequate resources are available for the protection of frontline workers.

Companies or persons who wish to donate are reminded that they can do so at the CDC’s headquarters, Thomas Road, Thomas Lands or make cash or cheque deposits into its Republic Bank account number 962356519938. Food and hygiene supplies can be dropped off at the Thomas Lands location daily between 09:00 hours and 15:00hours.