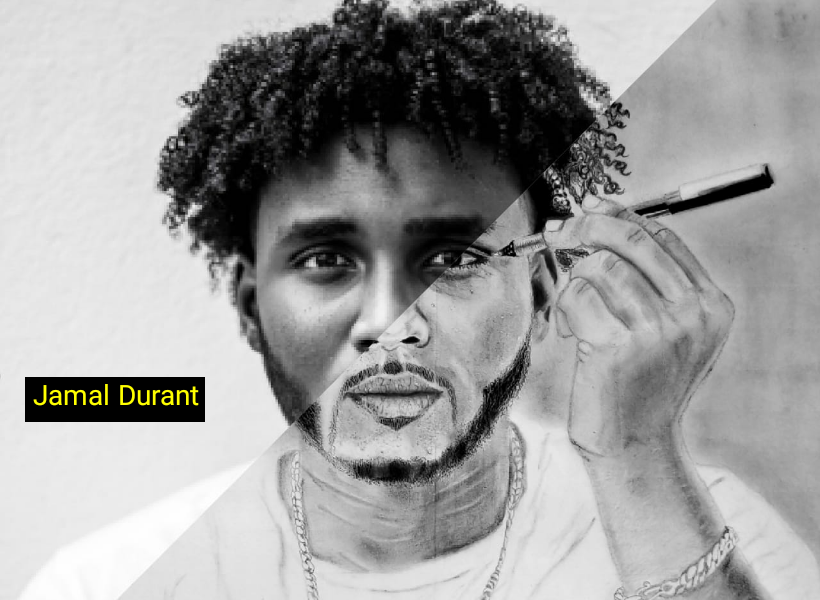 The Coronavirus diseases 2019 (COVID-19) has reached and scared almost everyone; awareness drives are being displayed everywhere through different means. These include press briefings from national leaders, video messages from health care workers, as well as newspapers advertisements.

But, there is still a handful of those who are still careless and not even bothered about the partial lockdown declared by government. In fact, there are still persons seen roaming the streets in total disregard of the social distancing measure.

In an effort to educate these people, Jamal Durant, 22, an upcoming artist from Old Kara Kara, Linden has come up with a novel idea. He has created a drawing with a Coronavirus awareness message.

His aim is for the drawing to reach as many people as possible to remind them of the deadly virus which has already claimed the lives of hundreds of thousands of people worldwide. He hopes that his creation will force people to stay at home and adhere to the COVID-19 precautionary rules issued by the Ministry of Public Health.

He continued, “The piece shows tears flowing from my eyes, me crying out for a better tomorrow while I am locked away in my home. It shows my pain for the people and our country. This virus is affecting everyone regardless of their creed, race or social class. Since this pandemic is not something you can see or touch, I tried to display the outside as a dangerous place. Hence, the historic Stabroek Market which is usually crowded on a daily basis is now empty. The caution tapes urge persons to stay away; the barbwires and cones indicate danger. Grass has now taken over the area since it has been a while since anyone has visited there.”

Durant told Guyana Standard that he has been drawing for as long as he could remember; in fact, all his life. The young man disclosed that he never attended art school since he took up drawing as a hobby while pursuing studies at the University of Guyana.

But after countless compliments by his friends and family, especially his mother, whom he described as his inspiration, Durant said he realized that he was “pretty good” at it, and as a result, ventured into doing 3D realistic drawings.