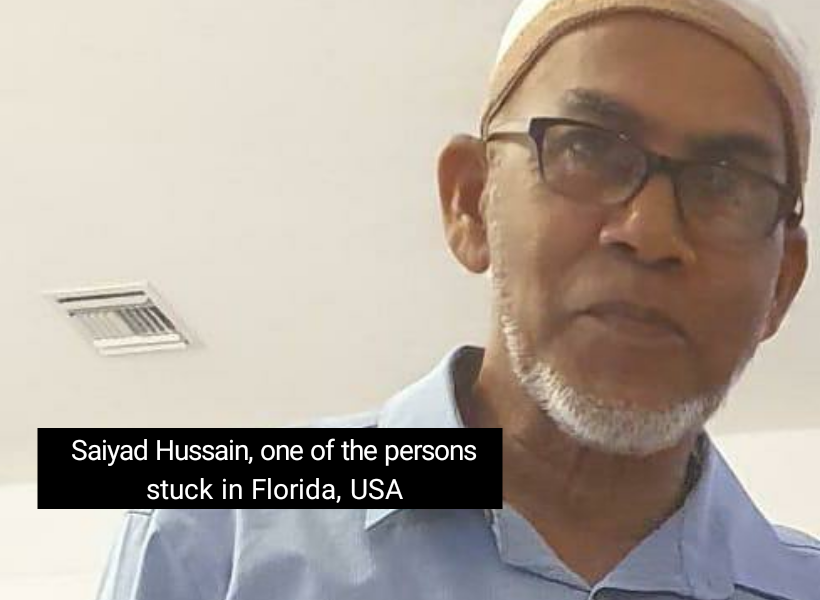 A medical doctor along with her husband, father, and brother who have been stuck in Florida, U.S.A for the past six weeks are pleading with the government to grant them permission for a flight to land here so that they can return home.

The family comprises Saiyad Hussain, Bibi Hussain, Mohamed Hussain, and Kimmey Buchoon. They traveled from Guyana to the USA on March 13 to attend a family member’s wedding.

They were expected to travel back to Guyana on March 27. Unfortunately, this did not materialize since the government closed Guyana’s borders following the discovery of the first COVID-19 case on March 11.

During an interview with Guyana Standard, Bibi Hussain recalled that on March 17, they were given a one- day notice of travel restrictions by the Government of Guyana, in which the borders will be closed to all international travelers, including citizens of Guyana.

Hussain said her family made several attempts to rebook a flight to Guyana before the borders were closed on March 31, but these efforts all proved futile.

However, upon expiration of this time period, the flight restrictions were extended for a longer time, up to May 1st, 2020, and now a further extension to June 3rd, 2020.

“As a result, my family and I have been stuck in Florida until such time that the Government decides to reopen the borders,” she added.

When asked how the family is coping, the woman stated, “We are okay in terms of living arrangements because we are staying at a relative but our money is running low because we are not working here.”

While the family noted that they understand the reasons for closing the borders is to reduce imported cases of COVID-19, they noted that other countries have made provisions for their citizens to return home.

Bibi Hussain, however, indicated that her family is willing to comply with stipulated guidelines, even if it means them having to undergo mandatory 14 days quarantine.

The woman said she spoke to Mr. Ramzan Ali, Consulate General to Guyana in Miami, who informed her that multiple requests were made to the National COVID 19 Task Force (NCTF) to facilitate her family’s return.

But, according to her, the requests have thus far been denied.

She added that Mr. Ali also highlighted that they can arrange with a reputable medical laboratory, Quest Diagnosis, located in Florida that has agreed to test everyone that is interested in returning to Guyana, at a cost of USD$80, which they are willing to pay.

This will be in the form of the PCR test as well as the rapid antibody test and it will take approximately two days to get those results.

She said, “Within those two days, we are required to self-isolate which is already being done since the USA is currently on lockdown.”

Only those who are tested to be negative will be allowed on the flight that Mr. Ali can organize with Eastern Airlines only for citizens of Guyana.

This will be at a cost for the person who wants to return home.

“I think that testing us prior to traveling is very important since this will ensure everyone traveling is negative and therefore reduces the risk of transmission of the coronavirus.”

It should be noted that this will be a one-time flight for Guyanese stranded in the USA and does not require the administration to lift those border restrictions.

“If it becomes necessary, we are willing to be tested in Guyana at a cost that we will endure since some private institutions are also offering these tests,” Saiyad Hussain noted.

He added that his 58-year-old wife and three-year-old granddaughter are home alone in Guyana and they have to rely on relatives to assist with groceries and other necessities, which is done only if these relatives are available.

“I am a chronic hypertensive patient who requires prescription medication that is currently finished and cannot be obtained here. My visitor’s visa also expired on 12th April 2020.”

Meanwhile, Mohamed Hussain said that his wife is six months pregnant and he needs to be home to care for her.