Canadian  High Commissioner to Guyana, Lilian Chatterjee, yesterday took to Twitter to register her disappointment at government’s decision to deny  The Carter Centre entry into Guyana to observe the recount of all ballots cast in the March 02, 2020 General and Regional elections ongoing at the Arthur Chung Conference Centre (ACCC). 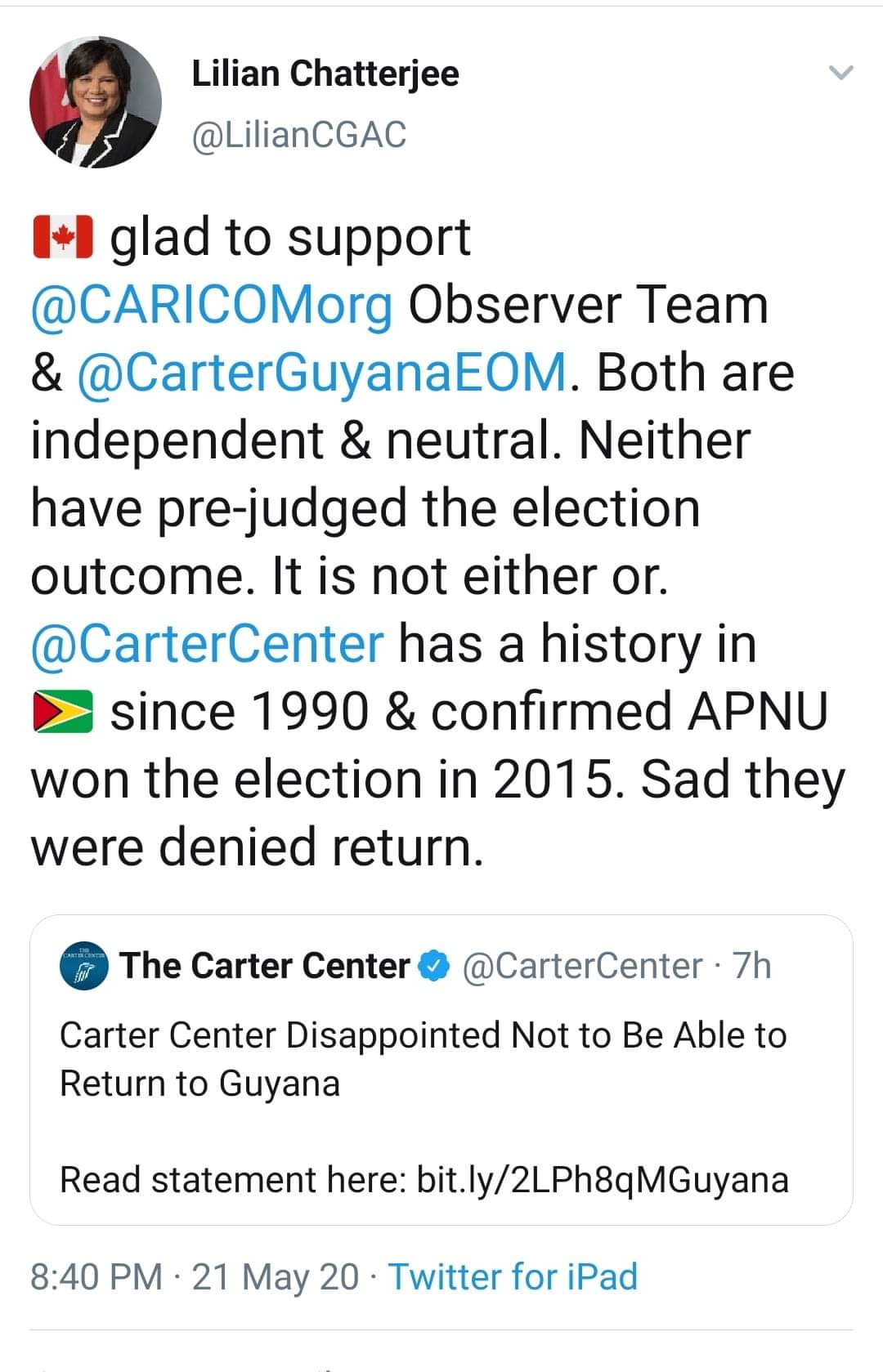 In response to a Twitter post by The Carter Centre in which it said it is disappointed not to be able to return, High Commissioner Chatterjee, said that Canada is glad to support the Caribbean Community (CARICOM) and The Carter Centre Election Observer Mission.

She pointed out that both of them are independent and neutral and neither has pre-judged the election outcome.

According to the Canadian envoy, “The Carter Centre has a history in Guyana since 1990 and confirmed the A Partnership for National Unity (APNU) won the election in 2015. Sad they were denied.”

As a matter of fact, Grant expressed that it is very concerning that Guyana has done this.

Yesterday, The Carter Centre hit back at the government for its lockout.

In a lengthy statement, it said that the government barring its observers from returning to Guyana to observe the incomplete electoral process shows that Guyana chose not to demonstrate a genuine commitment to transparency by ensuring that all duly accredited organizations, including The Carter Center, be allowed to conduct their work.

The Embassy of the United States of America in Guyana, has written to the government several times requesting permission for a small number of observers from The Carter Centre,which has been coming here since 1992, and the International Republican Institute (IRI), to return to Guyana to observe the national recount of all ballots.

However, the government, through Minister of Foreign Affairs, Dr. Karen Cummings has again and again rejected the requests, citing among other things, the international travel restrictions due to the COVID-19 pandemic.

But the very COVID-19 Task Force, for which President Granger has the final say, has granted special permission for not one, but around six flights transporting oil workers from Europe, U.S.A, the U.K, Canada, and other countries, to land here.

As recently as Wednesday, the COVID-19 Task Force granted permission for the return of 19 law students in Trinidad and Tobago, 70 Guyanese cruise ship workers attached to Royal Caribbean, four Guyanese in St Vincent and another 10 in St Maarten.

President Granger has insisted that the high-level Caribbean Community (CARICOM) team is best suited to scrutinise the recount exercise as their work meets international standards.

Against this backdrop, the President has requested of The Carter Centre and IRI to respect government’s legitimate decisions.

U.S. Ambassador to Guyana, Sarah-Ann Lynch recently said that there needs to be a more robust international election observer effort in Guyana so as to give citizens confidence that there are eyes and ears on the recount process.

According to the U.S. Ambassador, there are only five international observers at the recount exercise- three from the CARICOM- and two from the Organization of American States (OAS).

The Diplomat reasoned that considering that there are 10 workstations at the recount venue, there is a need for more international observers.

Already, the Guyana Elections Commission (GECOM), was given the green light to add two more workstations to speed up the process, which began on May 06, and is to proceed continuously for 25 days, inclusive of weekends and holidays

Ambassador Lynch further said that even with just the 10 counting stations, the observers can  only be observing five of those at any one time.

And while she praised the wonderful efforts of CARICOM and the OAS, she pointed out, “But they have small efforts. A more robust international effort would certainly give the citizens confidence that there are eyes and ears on the process.”

For this reason, Ambassador Lynch explained that the United States of America has been trying to get a small number of observers from The Carter Centre and IRI to return to Guyana to add to the efforts of CARICOM and the OAS.