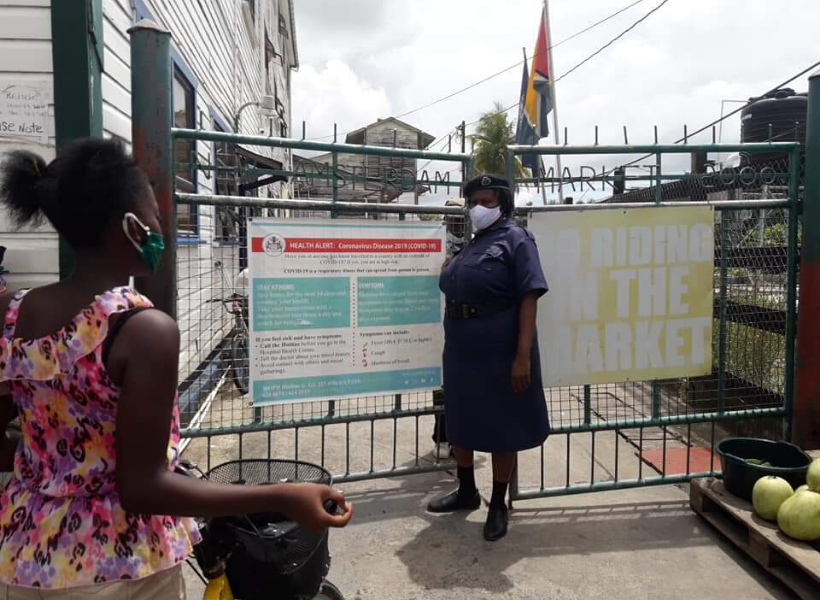 A woman, who is alleged to be infected with the novel coronavirus (COVID19) and who had earlier escaped from a Demerara quarantine centre, was yesterday afternoon apprehended while shopping for ”bush medicine” at the New Amsterdam Municipal Market.

This is according to Town Clerk Sharon Alexander, who had to order the immediate closure of the New Amsterdam Municipal Market.

According to Ms. Alexander, staffers of the Regional Health Services swooped down at the market, where they apprehended the alleged COVID-19 quarantine escapee, who happens to be a woman.

Thereafter, vendors were ordered to suspend sales for the day and “pack up”, while Municipal workers, with the exception of those who work with the Town’s Constabulary, were asked to go home.

Vendors said what gave the woman away, was the suspicious manner in which she was acting while enquiring about certain ‘bush medicines’.

But, according to the vendors, regional health officials had been on to her the moment she entered the market, as they had a photograph of her, and were quick to identify and apprehend her.

The latest on the matter is that she has since been taken to an unknown destination.

When contacted, Director of Health Services Jevaughn Stephens said that they learned of the woman’s escape from quarantine via a call to the hotline, alerting them to what had occurred, and advising that she had been last seen in the vicinity of the New Amsterdam Market.

“Consequently, we dispatched our rapid-response team to verify and collect the patient,” Stephens said.
Following the Town Clerk’s ‘shut-down’ order, officers of the Regional Environmental Health Department have been mobilized to sanitize the municipality.

Since Guyana recorded its first COVID-19 fatality in mid-March with the death of a 52-year-old remigrant East Coast Demerara woman, New Amsterdam followed closely early last month with the passing of a 78-year-old retired nurse, who had just before her demise returned from the United States.

In the wake of her passing, the streets and Municipal complex have been sanitized, hand sinks have been installed around the township, and business hours have been shortened.

As of yesterday, the number of confirmed cases in Guyana has risen to 137.