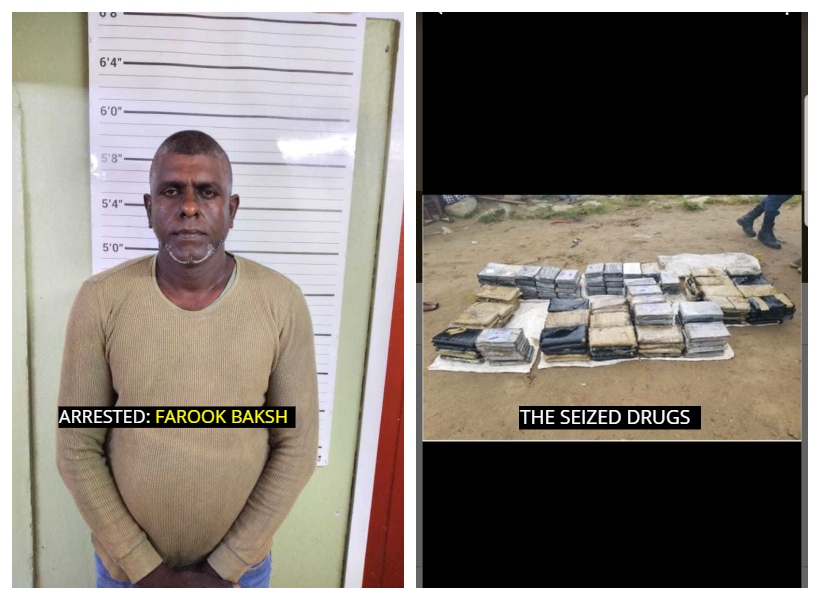 After being on the run for two years, a 44-year-old boat captain who was recently arrested, has been charged for trafficking cocaine and marijuana.

Farook Baksh called ‘Dive and Shoot” of Mon Repos North, East Coast Demerara appeared before Magistrate Rochelle Liverpool in the Sparendaam Magistrate’s Court where two charges were read to him.

Mon Repos, East Coast Demerara (ECD) he had in his possession 91.132 kilograms of cocaine and 56.008 kilograms of marijuana for the purpose of trafficking.

He denied both charges after they were read to him and was remanded to prison.

In 2018, CANU issued a wanted bulletin for Baksh after they believed he attempted to smuggle a large number of drugs into the country on a vessel.

According to information, on the day in question at around 04:00 hrs, CANU ranks intercepted a massive cocaine and marijuana shipment at Mon Repos Channel, East Coast Demerara.

Baksh however escaped while the ranks were closing in.  At the time of the search, ranks were able to arrest 51-year-old Azim Baksh called “Bato”, a furniture maker, of Good Hope, East Coast Demerara.

He was later charged and jailed for five years, together with a fine of $221M after being found guilty of trafficking cocaine and marijuana.