Home News Yellowtail-1, Yellowtail-2, and Redtail could support another FPSO for Guyana-Hess Corp. 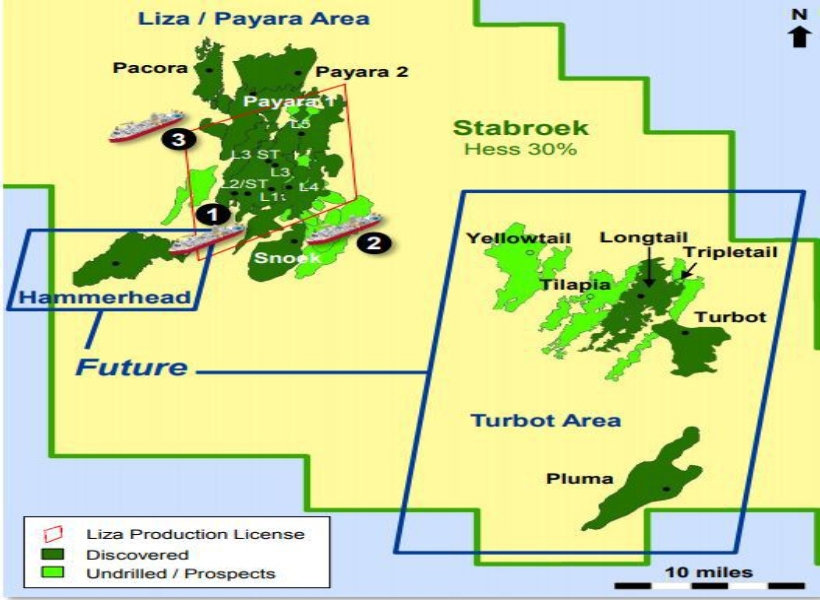 Hess Corporation, the American exploration giant with a 15 percent working interest in the Stabroek Block, has disclosed that the Yellowtail-1 Yellowtail-2 and Redtail wells could support another Floating Production Storage and Offloading (FPSO) vessel offshore Guyana.

The company reminded that the Noble Don Taylor spudded the Redtail exploration well located approximately 1.4 mile northwest of Yellowtail-1 on July 13. Hess said that the well will target similar stratigraphic intervals as Yellowtail, will consist of an original hole and sidetrack,, and will include an option to conduct the drill stem test in the future. Guyana Standard understands that the results of Redtail-1 and Yellowtail-2 will be incorporated into Hess’ evaluation of the Yellowtail area.

Further to this, Hess said, “The partnership is looking at the cadence and the development of (the wells) which is going to be for Phase Four and Phase Five and it is looking very promising.”
The company said too that the Yellowtail and the Redtail development is showing more promise than its proposed Hammerhead project that is currently under review at the Environmental Protection Agency (EPA). In this regard, it was noted that Yellowtail and Redtail hold a much higher value of oil than Hammerhead since Hammerhead is a heavy oil discovery. “So the potential for it jumping the queue and being much earlier in the queue is certainly a lot higher given what we’ve seen in Yellowtail-2 and what we expect to see in Redtail as well,” the company noted.