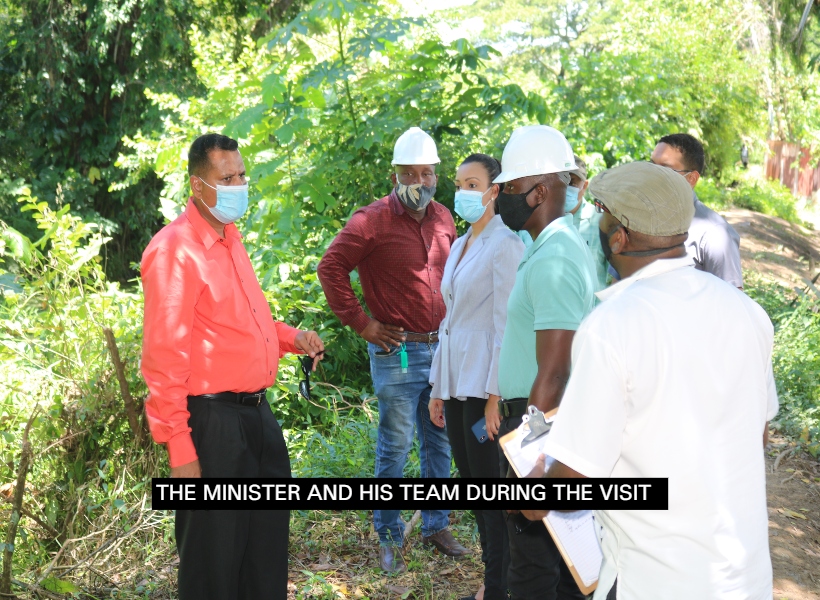 Over the coming months, the Ministry of Housing and Water, Community Development Department will be working to relocate a number of families who are currently occupying a section of the reserve in Durban Back Land which runs along the East Demerara Water Conservancy.

Yesterday, the Housing and Water Minister, Collin Croal and Minister Within the Ministry, Susan Rodrigues, led a team from the Guyana Water Authority as they visited the area in question to get a first-hand look at the situation. The issue was brought to the Ministers’ attention during their first engagement with officials from the Guyana Water Incorporated.

The Ministers assured that the situation will be dealt with expeditiously given its nature but not before a thorough assessment is done. Having seen the gravity of the situation, Minister Croal committed his Ministry’s resources for an amicable solution.

Meanwhile, GWI’s Regional Manager Reg. 4 Eson Pearson, in giving the Ministers a brief on the situation, pointed out the urgency to have the families relocated. According to Pearson, the risk of contamination is significantly high. He further stressed the need for monitoring of the conservancy as he explained that persons continue to flout cease and desist orders without thinking about their safety and that of others.

The issue of poor sanitation practices was also raised.

To this end, Community Development Officer, attached to the Ministry of Housing, Gerard Gilkes who was also a part of the Housing team on site, highlighted that the agency has commenced work to address the issue.

In March of this year, the agency began a data collection exercise which entailed a count of existing structures and households. This mechanism was employed so as to guard against new structures being erected and will serve as a guide to the relocation process.

In addition, each household was invited to lodge an application with the agency and those who have never applied were invited to do so. However, due to the Covid-19 restrictions, the new applicants were not able to have their interviews done. As such, the agency is working to expedite this process.

The East Demerara Water Conservancy supplies water to the water authority for treatment and distribution in and around Georgetown and its environs.