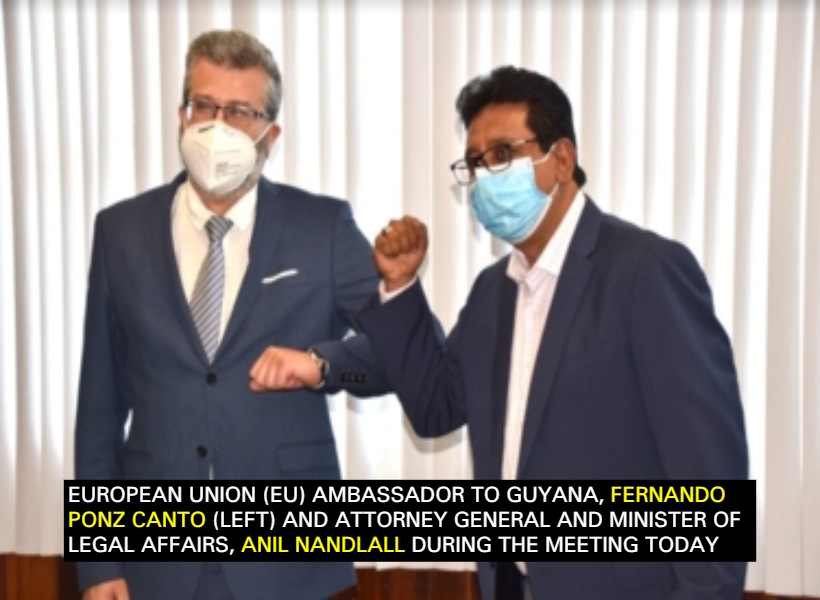 European Union (EU) Ambassador to Guyana, Fernando Ponz Canto says that the EU Election Observer Mission (EOM) will return to Guyana to discuss the concluded elections report, and to begin the implementation of the recommendations contained therein.

He told the Attorney General and Minister of Legal Affairs, Anil Nandlall, when they met today in the capital.

The Attorney General began the meeting by thanking the Ambassador for the role the EU played during the March 2, 2020 National and Regional Elections, more specifically, in the battle to ensure that the will of the electorate was respected and that democracy prevailed.

The Ambassador congratulated Minister Nandlall on his appointment as Attorney General and Minister of Legal Affairs and expressed that on a personal level he is very impressed with the Attorney General’s command of the law, especially, in the areas of electoral and constitutional matters.

Further, the Attorney General informed the Ambassador that Guyana being a budding oil and gas country would require legislative help, since we have little to no legislative framework in place to manage and regulate the sector.