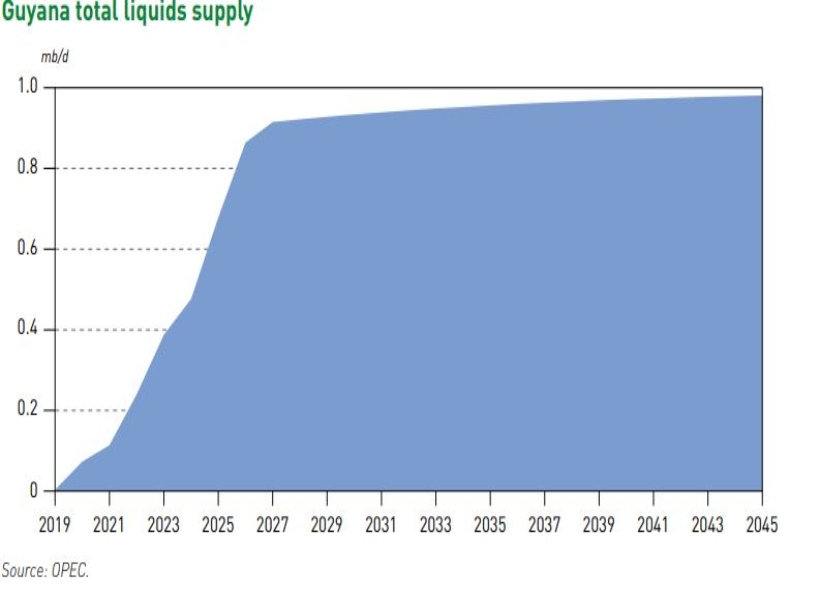 According to the latest report of the Organization of the Petroleum Exporting Countries (OPEC), Guyana is not only on track to see its oil production grow in the next five years, but it will also be one of the few non-OPEC nations to help the global oil industry on the road to recovery.

With respect to the nation’s oil sector growth, OPEC said that production from approximately 90,000 to 100,000 barrels per day in 2020 is expected to move to 700,000 barrels in 2025 as output at the already-online Liza complex ramps up further and adds new projects in 2022 and 2024. These projects include Liza Phase Two and Payara respectively.

Beyond 2025, OPEC said further increments are expected to boost Guyana’s total liquids production to one million barrels a day in the mid-2030s while noting that it will plateau there. It said that further expansions are likely, given recent discoveries and prolific wells. It was keen to note however that until the country has absorbed its new-found oil income politically and economically – and on top of the current uncertain outlook given the COVID-19 pandemic – it is reluctant to project higher growth for production.

ABOUT OPEC
The Organization of the Petroleum Exporting Countries is a permanent, intergovernmental Organization of 13 members which was created at the Baghdad Conference on September 10–14, 1960, by Iran, Iraq, Kuwait, Saudi Arabia and Venezuela. OPEC had its headquarters in Geneva, Switzerland, in the first five years of its existence. This was moved to Vienna, Austria, on September 1, 1965.

OPEC’s objective is to co-ordinate and unify petroleum policies among Member Countries, in order to secure fair and stable prices for petroleum producers; an efficient, economic and regular supply of petroleum to consuming nations; and a fair return on capital to those investing in the industry.