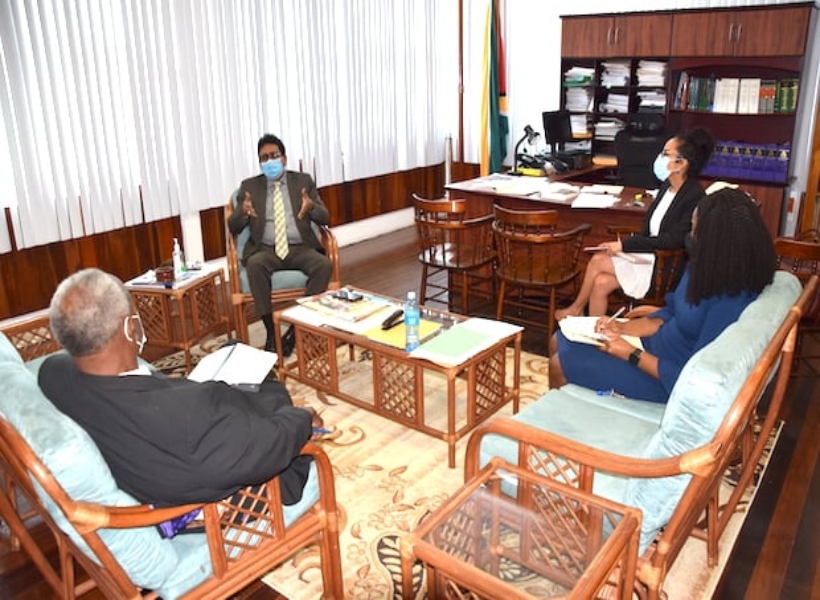 The Attorney General and Minister of Legal Affairs, Mohabir Anil Nandlall recently met with Justice Courtney Abel, a retired Judge of the Supreme Court of Belize. The meeting centered on the drafting of an Arbitration Bill and Arbitration Rules for Guyana.

Justice Abel, according to the ministry, is proficient in the area of dispute resolution and was instrumental in the drafting of the Arbitration Act and Arbitration Rules of Belize. He has also trained persons to be Arbitrators and was the Chairperson for the Belize Court-Connected Mediation and Arbitration Program. Justice Abel indicated that he is excited to work with the Government in a number of areas, including arbitration.

The Attorney General shared with Justice Abel that the Government will be enhancing Guyana’s legislative framework to ensure it is conducive to economic development. To this end, high on the Government’s legislative agenda is a modern Arbitration Act that addresses both domestic and international arbitration.

Arbitration is the most preferred form of dispute resolution for the oil and gas industry and a modern legislation will instil confidence in international investors that Guyana is a competent arbitration venue. The new law will give persons and companies a different avenue to resolve their disputes outside of the Courts. The Attorney General indicated that the vision is to make Guyana an arbitration hub of the Caribbean and Latin America.

The Attorney General also shared with Justice Abel the draft Bill prepared by CARICOM and the Improved Access to Justice in the Caribbean (IMPACT Justice) Project. This Bill is based on the United Nations Commission on International Trade Law (UNCITRAL) Model Law on International Commercial Arbitration. Justice Abel committed to working with the Attorney General’s Chambers to review the draft Arbitration Bill with a view to improving it and preparing arbitration rules.

The draft Arbitration Bill was also shared with relevant stakeholders for their input.