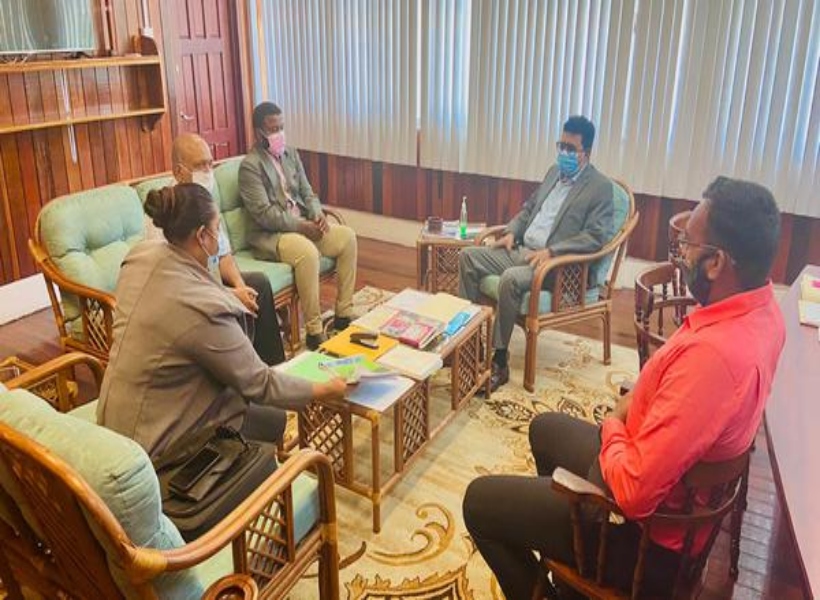 Today, the Attorney General and Minister of Legal Affairs, Anil Nandlall, met with members of an organisation called the Guyana Hemp Association. This organisation seeks the Government’s support in cultivating hemp on a plantation scale in Guyana.

The Attorney General formally thanked Deorga and his team members of one of the small political parties that helped to restore democracy in Guyana.

The Attorney General informed Deorga that the government made many promises which they intend to deliver, and exploring the cultivation of hemp on a plantation scale in Guyana is one of those promises.

The Chief Operations Officer, Dr. Asha Kissoon, produced multiple written proposals to the Attorney General, setting out all the impacts and projections hemp would have if produced in Guyana.

Dr. Kissoon was the The New Movement (TNM)’s Presidential Candidate for the March 2 polls.

Deorga further discussed that an organization by the name of “Nirvana” has recently begun the production of hemp in Miami and attorneys-at-law in Miami have already drafted legislation. He highlighted a number of other jurisdictions where hemp is being cultivated.

Deorga expressed concerns about the occurrence of the Dutch disease due to the high profitability of hemp. He emphasized the need for the National Agricultural Research and Extension Institute and the University of Guyana to be involved in the initiative since individuals in the agricultural sector know everything about hemp, however, refuse to get involved because of politics.

Deorga stated that Suriname has already begun the production of hemp on a large scale. Dr. Kissoon highlighted that hemp cannot be planted with marijuana because the plants would cross pollinate and this would destroy the entire crop. The team explained that hemp is a multi-billion-dollar industry which can lend to the production of hundreds of items and can create fifty thousand (50,000) jobs in Guyana.

Dr. Kissoon further explained that hemp does not contain
tetrahydrocannabinol (THC) and is not a psychoactive drug.
The Attorney General agreed to study the bundle of documents submitted to him by the association and to incorporate it into his advice to Cabinet on the issue.