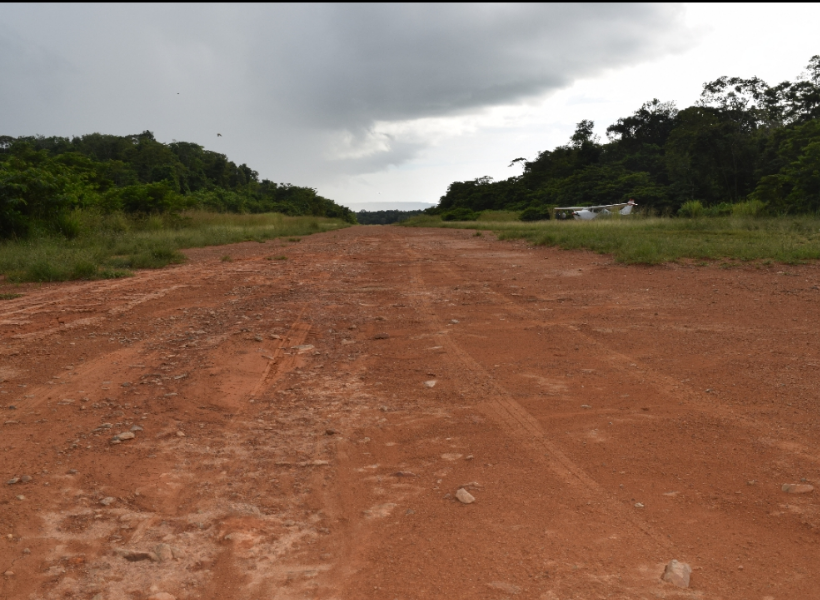 Some 2100 feet of Hinterland airstrip in Eterinbang will be upgraded soon. This was revealed by Minister of Public Works, Bishop Juan Edghill during a visit to the area today.

Accompanying Minister Edghill was the Assistant Aviation Inspector, Alphonso Mangah, Chief Transport Planning Officer, Patrick Thompson, Senior Engineer, Dionne Amsterdam and Chief Inspector, Aerodromes and Ground Aids, GCAA, Adrian Bassier.  After landing in Eterinbang, Minister Edghill pointed out his concerns over the maintenance of the airstrip, since bushes have been taking over. In fact, vegetation has now grown over the cones strategically placed to border the airstrip.

Against this backdrop, the Public Works Minister suggested to the maintenance team to explore marking the area and possibly spray the grass for a permanent solution, which will also allow for drainage on the 2100 feet runway.

Workers however complained that the grass has been growing back quickly due to weather.

During a meeting with residents of Eterinbang, it was suggested that laterite not be used since it is a temporary measure. Residents explained that they would like the structure to be paved with concrete. They were keen to note that they believe the people are skillful enough to get the job done.

Minister Edghill said he is well aware of the need for the airstrip to be properly rehabilitated and will discuss the possibility of giving the people what they want.

He nevertheless charged the “skilled men” in the area to complete a full cleaning of the airstrip to prove their competence. This project will see the airstrip being cleared of all vegetation to allow for drainage.

The team said the work will be completed by Monday, considering the weather conditions.

Minister Edghill personally thanked the group of residents for clearing the airstrip for him to land, since water had reportedly accumulated on the runway. The Minister nonetheless pointed to the importance of the airstrip being safe and clean at all times.