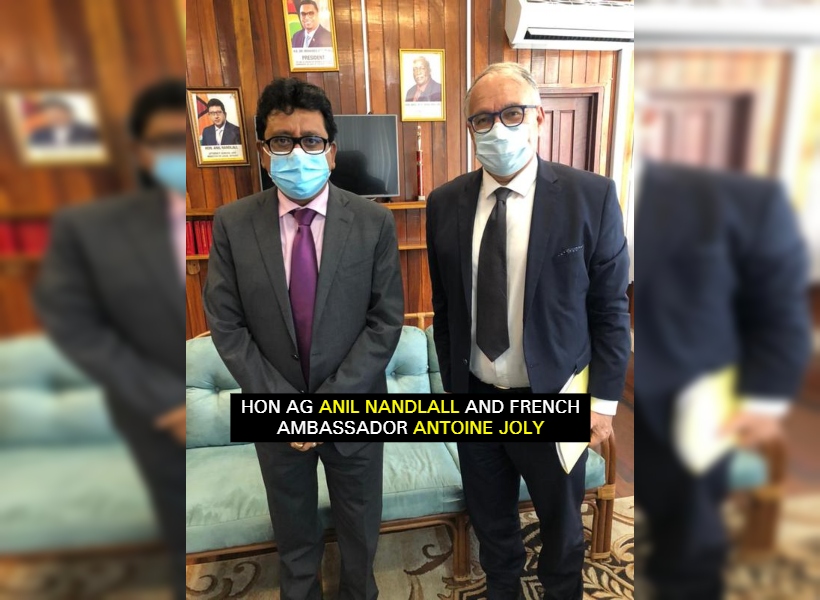 Among the issues discussed was the Guyana/Venezuela border dispute which is before the International Court of Justice (ICJ).

Ambassador Joly indicated that his country will be issuing a statement supporting Guyana and the responsible position the Government of Guyana has taken in dealing with the latest act of aggression by Venezuelan authorities.

The Ambassador condemned the use of force by that country including their latest incursion into Guyana’s territorial waters and arrest and detention of two fishing vessels with Guyanese fisherman.

He recognized the support Guyana has received from the Caricom Community (CARICOM) and the global community and commits to lend a voice to same.

The two officials also discussed the need for mutual, enhanced legal assistance on criminal matters and continuous cooperation in the Criminal Justice sector because of the large number of Guyanese who are in the French Guiana prison system.

The Ambassador raised with the Attorney General, the large number of Haitians who are using Guyana as a transshipment point en route to French Guiana, describing it as a growing problem which must be addressed.

Nandlall was congratulated for the central role he played in the struggle for democracy in Guyana recently.

His Excellency Joly was also thanked for his country’s support, individually and at the level of the European Union (EU). Nandlall indicated that “It helped the democratic process in Guyana.”