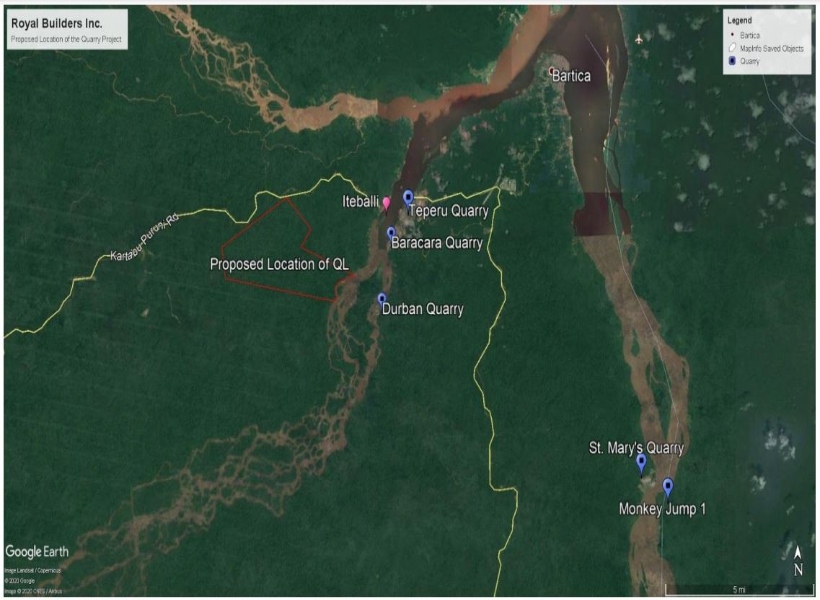 Royal Builders Inc., located at Lot 15 Garnett Street, Campbellville, Georgetown, has applied to the Environmental Protection Agency (EPA) for permission to move ahead with its proposed quarrying project along the Mazaruni river. The company is simultaneously seeking a Quarry Licence (QL) from the Guyana Geology and Mines Commission (GGMC). The QL being applied for covers an approximate area of 3,888 acres and lies to the immediate south of the historic St. Edwards Quarry and to the west of Teperu, Baracara, Durban, and Karia Island Quarries.

It should be noted that the area being applied for is already allocated for mining by the GGMC. According to the project summary, the area is presently covered by a series of medium-scale prospecting permits for gold. It was noted however that there are no active gold mining operations in the area and the potential for significant gold occurrences is virtually non-existent.

Given the lack of mining activity in the area and the low potential for any gold occurrences, the company expects that the QL being applied for will be granted. Guyana Standard understands that the QL carries a work performance bond that has to be lodged with the GGMC and a fixed schedule of rental payments for the land as well as several other reporting and performance requirements to keep the license in good standing.

Furthermore, this area was selected and located by the company based on the presence of numerous historic and active quarries nearby.

After the recovery of a substantial portion of the capital investment, the company noted that the second phase of investment and expansion will aim to have production increased. Further to this, the quarry will see a capital investment of not less than USD$3,000,000 and will have an initial workforce of at least 40 (local) employees.

Guyana Standard understands that the development of the facilities for this quarrying complex will be completed within 6 to 8 months of the QL being granted.

The primary reason for the establishment of this quarry is to satisfy the current and anticipated demand based on the projections by the Ministry of Public Infrastructure and private sector.