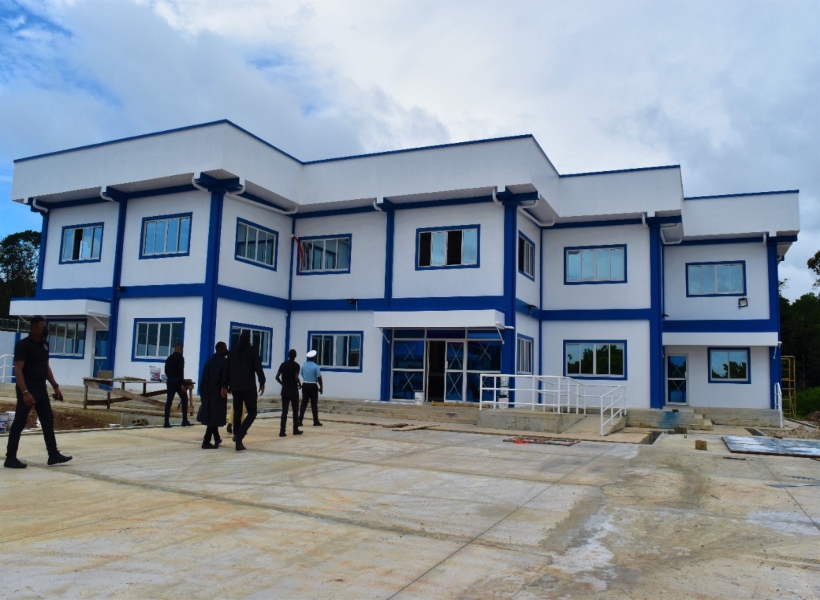 Set against the background of the scenic ‘Eagle’ mountain, the multi-purpose building is located at 111 Miles Potaro Road in Mahdia Town.

Constructed on the recommendations of the British during their recent study, the new and modern police station in Mahdia will serve as the divisional headquarters for Region 8.

The building houses, among other things, six spacious compartments, and is reportedly being constructed at a cost of close to G$300M. The headquarters building will function as a multi-purpose one, housing various departments of the GPF, including traffic and immigration.

The new headquarters building is located a relatively short distance from central Mahdia. According to Police Commander for Region 8, Senior Superintendent Michael Kingston, the area has been earmarked for a Regional Hospital (to be constructed next to the Police H/Q) and an Army base adjacent to the police station.

Commander Kingston said the new H/Q building, which is a major disconnect to the current dilapidated cramped police station, is in keeping with plans to decentralize the Guyana Police Force and will add great value to the Police Force in this division.

A team from the Police Force’s Corporate Communications Unit (CCU), headed by Director Mark Ramotar and Deputy-Director Stan Gouveia, visited Mahdia on March 25th and 26th and was given a guided tour of the new Police headquarters building under construction as well as a briefing on the prioritising of adequate resources and logistical challenges associated with policing the region.