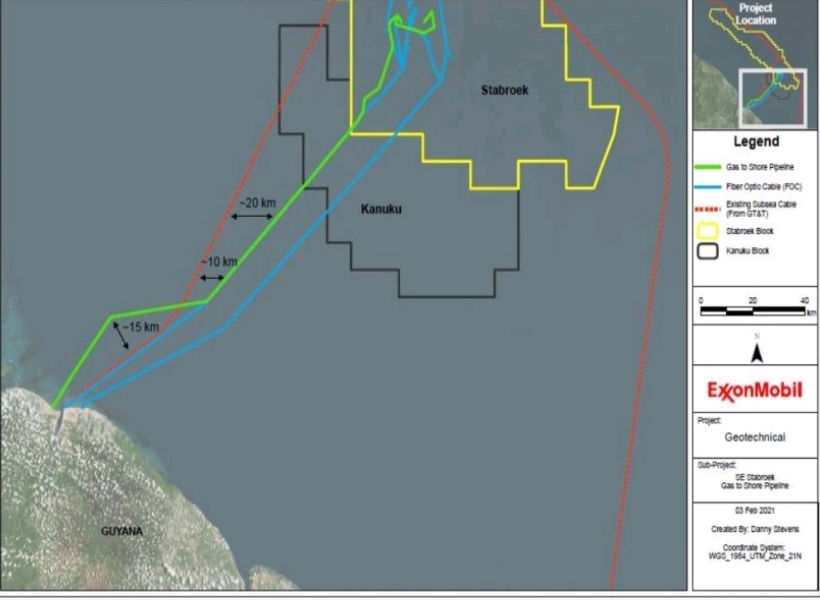 ExxonMobil’s subsidiary, Esso Exploration and Production Guyana Limited (EEPGL) has received orders from the Environmental Protection Agency (EPA) to conduct an Environmental Impact Assessment (EIA) for its Gas to Energy Project before any approvals can be provided.

In a notice to the public, the EPA noted that the project includes the construction, commissioning, and operation of an Onshore Natural Gas Liquids and Natural Gas Processing Plant (NGL Plant) proposed to be located at the Amsterdam (Demerara River)/Vriesland Area, West Bank Demerara; and an offshore 12-inch pipeline (approximately 220km long) from the Liza Phase 1 and Liza Phase 2 Floating, Production, Storage and Offloading (FPSO) vessels situated within the Stabroek Block, Offshore Guyana to La Jalousie/Nouvelle Flanders, West Coast Demerara.

It also includes an onshore 12-inch pipeline (approximately 27km long) commencing North from the proposed NGL Plant Site, then West and North again towards Canal No.2, where it turns West traveling along the Canal, before proceeding North across Canal No. 2, through agricultural fields, an additional smaller canal, Canal No.1 and residences of Canal No.1, and additional agricultural fields to a point West of La Parfaite Harmonie, Westminster and Onderneeming.

In addition to the foregoing, ExxonMobil is expected to have a Temporary Materials Offloading Facility (MOF) at Amsterdam/Vriesland on the West Bank of the Demerara River, inclusive of other support works such as associated dredging, in-water construction activities, road construction, road improvements and post-construction restorative works around the entire proposed project area.

As a result of the intended developmental activities, possible effects on the environment may include impacts to marine water quality, air quality, marine, and terrestrial flora and fauna, socioeconomic resources, among others. As such, the EPA has determined that the proposed project may significantly affect the environment and therefore will require an Environmental Impact Assessment.

The EIA will include but not be limited to all possible alternatives studied, effects on the environment, and assessment of risks, and may lead to further optimization of the proposed project. Members of the public are hereby invited, within twenty-eight (28) days of this Notice, to make written submissions to the Agency, setting out those questions and matters which they require to be answered or considered in the EIA.
A summary of the project can be viewed on the EPA’s website or uplifted at the EPA’s Offices in Linden (Region 10), Whim (Region 6), or Sophia, Georgetown, at the reasonable cost of photocopying.