Home News Over $80M in contracts handed over to improve water services in Kamarang,... 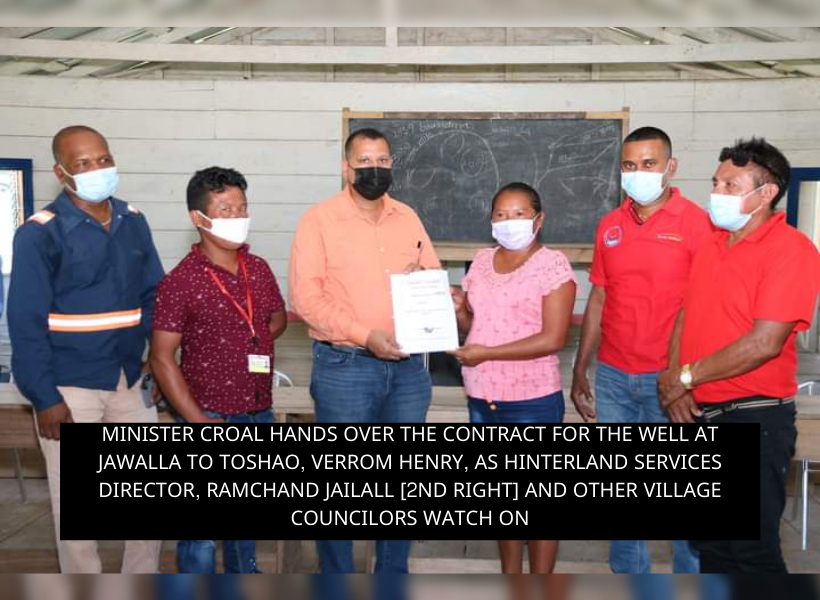 Approximately $80M has been invested for the drilling of two wells in Region Seven, as the Ministry of Housing and Water aims to achieve 95 percent hinterland water coverage.

Minister of Housing and Water, Collin Croal, who handed over the first contract in the community of Jawalla, stated that development will bring first-time access to hundreds of households.

“Delivery of safe water to communities is a priority for the PPP/C government, to enhance the livelihood of Guyanese, irrespective of their geographical location,” the Minister said.

He added, “we want to assure you that we’re at work and there is currently 80 percent coverage across the hinterland, despite geographical challenges.”

Meanwhile, in the community of Kamarang, the Minister said that during needs assessments for Budget 2021, it was discovered that the area had no means for accessing potable water. Through this intervention, 90 percent of the community will now have access to potable water, including government buildings. The contracts were handed over to the Toshaos in the presence of a Member of Parliament and the Geographical representative of Region Seven, Allister Charlie, GWI’S Hinterland Services Director, Ramchand Jailall, regional representatives, and residents.

Drilling in Kamarang begins in one week, after which the rig will move to Jawalla by mid-September, and be completed in October. A total of 3,000 residents are expected to benefit. In 2022, the Minister stated that a number of new wells will also be drilled to improve hinterland services, signaling a $350 million injection by the Ministry since August 2020.