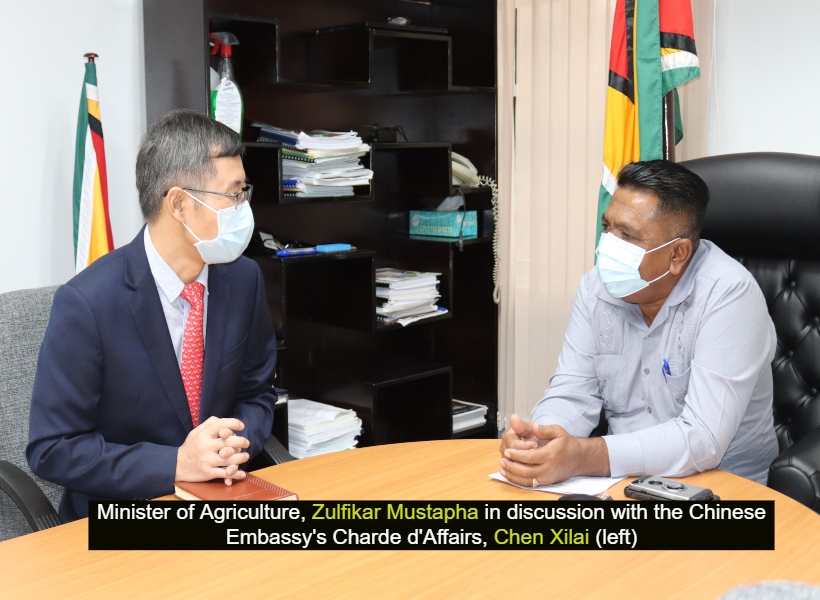 The Chinese Government through its embassy in Guyana has once again signaled its commitment to assist the government with its flood-relief efforts. This was disclosed yesterday by the Embassy’sCharge d’Affaires, Chen Xilai during a meeting with Agriculture Minister Zulfikar Mustapha.

The meeting which took place at the Minister’s Office saw the officials discussing several areas for collaboration in the sector which included technical cooperation for the rice and aquaculture sectors as well as assistance for flood-affected farmers.

Minister Mustapha explained that the government is currently working to resuscitate the sector and get affected farmers back to the land. He further stated that the Ministry is looking at long-term systems to minimize the effects of climate change on the sector.

“With the recent flooding, our agriculture sector suffered a massive hit, both crops, and livestock. Right now, the government is working to give some assistance to farmers so that they can get back to the land. In addition to the assistance that was recently announced by the President, from the Ministry’s standpoint, we are working to help farmers with things like seeds and other planting materials… Moving forward, the government through the Ministry will be working to develop more shade houses across the country given the impacts of climate change on the sector,” Minister Mustapha said.

During his remarks, Mr. Xilai said the Chinese Government, given its long-standing diplomatic relation with Guyana, was pleased to offer assistance to the government and people of Guyana in a time of need. He was keen to remind that the Embassy had provided a batch of much-needed supplies to the Civil Defence Commission during the early stages of its outreach efforts. He said, later on, the Embassy provided US$50,000. The official said, “We know that agriculture is quite vulnerable, and with the extreme weather conditions because of climate change we have to prepare for those kinds of challenges. In terms of soya beans, China is the largest importer of soya beans.”

He added, “We are also a very large importer of peanuts. If we can encourage local farmers in Guyana to plant those commodities on a large scale, there’s an additional market over in China. From our end, we are happy to provide technical assistance and training for farmers and fishers. We can also look at providing assistance in other areas as part of your flood-relief efforts.”

On this note, Minister Mustapha informed the official that the Ministry is working to expand the country’s non-traditional and aquaculture sectors.

“We are also expanding into non-traditional and aquaculture sectors. Those sectors have great potential. We are also looking at corn and soya beans because we want to be self-sufficient. A pilot project is currently going on and we hope to move into large-scale production soon after,” Minister Mustapha disclosed.