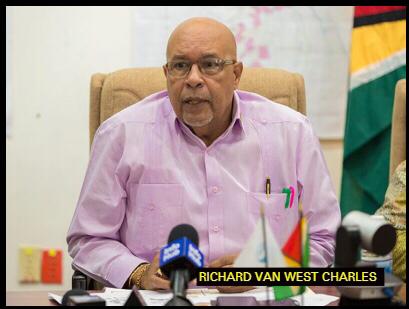 Principal Magistrate Sherdel Isaacs-Marcus, this morning, released 72-year-old Dr. Richard Van West Charles, the director of Atlantic Fuels Inc, on $100,000 bail after he pled not guilty to the charge of submitting a false invoice to the Guyana Energy Agency (GEA).

The charge states that on November 13, 2020, at the Guyana Energy Agency, 295 Quamina Street, South Cummingsburg, Georgetown, AFI submitted invoice #100, regarding a shipment of diesel claimed to have been purchased from Global Oil NV, knowing same to be false or misleading.

Charles was advised to return to court on August 16.
This is not the first time the fuel company has been brought to court for submitting an invoice showing alleged false or misleading information. In 2019, the company was under investigation by GRA for under-invoicing and falsifying invoices. As a result, GRA went after the fuel company for taxes for that year. This matter is currently before the Court, the company’s attorney, Siand Dhurjon told the magistrate.

The fuel company has also filed contempt proceedings against GRA and GEA, which earlier this year, had both been ordered by the High Court to pay in excess of $12 million in storage cost for 635,353 liters of diesel fuel which they had seized from the fuel company.
Atlantic Fuel Inc., was granted an import/export and store fuel license in 2016.