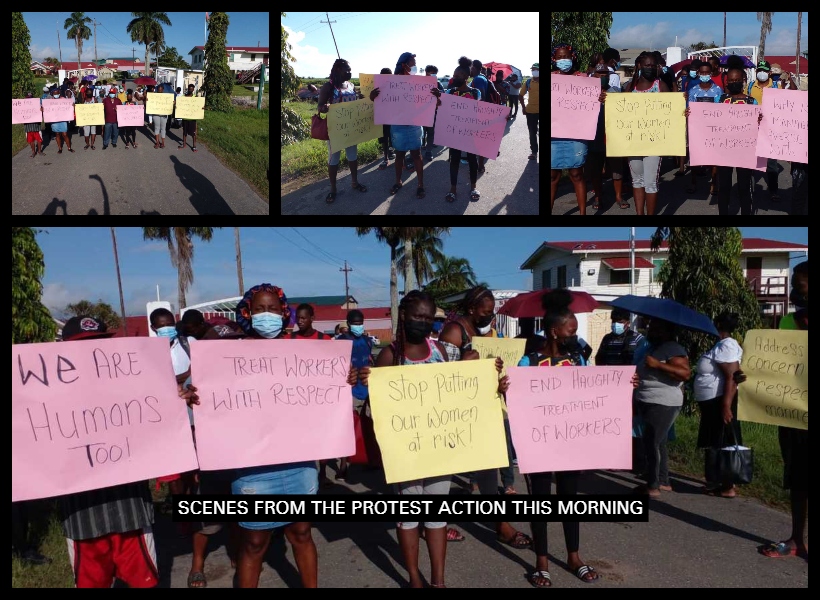 Workers of the Burma Rice Research Station this morning staged a picketing exercise outside of the station to register their serious concerns regarding the attitude of one of their managers.

The workers, following the recognition of Guyana Agricultural and General Workers Union (GAWU) earlier this year, have been bitterly complaining of the attitude of the manager. They have shared that the manager, at times, has been most “haughty” to the workers.

According to them, the manager, on some occasions, would speak to them in an abusive fashion which appeared to them to be threatening. The workers held that should the manager have difficulty with them or their work, such interactions could be done respectfully and civilly and there was no need for boisterousness.

The GAWU having learned of the complaints, drew it to the attention of the Station’s Management.

“Our Union registered our serious concern noting that there was no need for such conduct. We held that the attitude displayed could lend to antagonistic relations which were not in the workers nor the Station’s interest. The Union urged the Station that the manager be spoken to about his conduct as we feared the situation could escalate,” the union said

It added that following its intervention, the Station informed that it had spoken to the manager about his conduct and that should difficulties arise, these could be addressed by the senior management to avoid deteriorating relations between the workers and the management.

Despite this undertaking and efforts to turn a new leaf, reports surfaced that the manager’s conduct had not changed. The situation escalated last week after the manager withheld payments from workers alleging, they had not completed their tasks.

The affected workers, according to GAWU, related they were never told that their wages would be withheld nor were they allowed to even explain.

“They only learned of the manager’s decision when they went to uplift their wages last weekend. Our Union having learned of the issue, immediately intervened and we learnt that an investigation was launched. Apart from that the continued attitude of the workers has deeply upset the workers prompting them to stage a picketing exercise this morning. We are hopeful that better sense can prevail and the workers and the management can be able to work together in a respectful and dignified manner in the advancement of the Station,” GAWU declared.