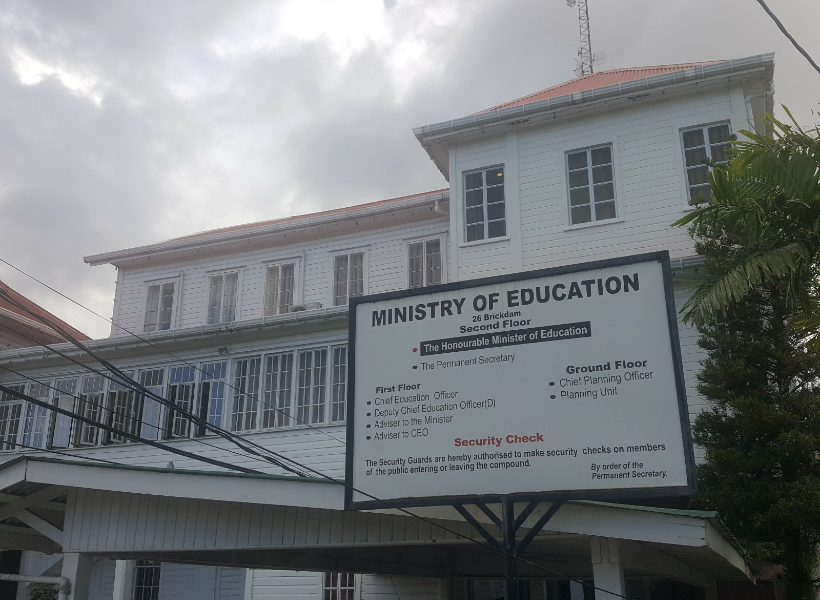 The Guyana Police Force (GPF) was Wednesday called in to evict a member of staff attached to the Education Ministry, who refused to leave the compound after he failed to provide proof of vaccination or a negative COVID-19 test.

The incident has since garnered a lot of attention with persons saying that the public servant was handcuffed and dragged out of the compound. The Ministry, on the other hand, is denying this claim.

It said that following the Gazetted COVID-19 Emergency Measures (No. 20) which took effect from August 1, 2021, and valid until August 31, 2021, the Ministry of Education through the office of the Permanent Secretary issued clear instructions on August 9th, 2021 to all Heads of Department about the adherence to the requirements of the order.

One measure contained in the order is that all staff must present their vaccination card and identification card to enter any of the Ministry of Education’s buildings. Employees who refuse to be vaccinated are required to provide a negative test result to their relevant heads of department on a frequency determined by the Ministry.

Before the strict application of this specific measure, staff were given two weeks grace period.

Further, on August 11, 2021, Heads of Department were provided with the updated information from the Ministry of Health for COVID-19 vaccination exemptions which identified specific groups of persons who can be exempted from taking the vaccine such as breastfeeding mothers, pregnant women, and persons who were tested positive for COVID-19 within 90 days.

On August 23, 2021, a memorandum was sent out to all heads of department again through the office of the Permanent Secretary informing staff that there will be strict adherence to the Gazetted Order while recognizing the exempted groups of persons.

But the staff member attached to the Personnel Department of the Ministry at 21 Brickdam showed up without proof of vaccination or a negative test. He was denied entry into the compound.

The ministry said that the staffer persisted that he cannot be denied entry and forced his way into the compound and took up his post at his desk. He was asked three times to leave but refused.

The Guyana Police Force was subsequently contacted and officers arrived to address the matter. He was cautioned by the officers and eventually decided to leave the building. He was not escorted or handcuffed as is being reported, the Ministry said.

It added that other staff members had also breached security, violated the Gazetted Order along with the Ministry’s instructions, and entered the building. They too were asked to leave the building in accordance with the Gazetted directive and peacefully complied without being forced or escorted out of the building.