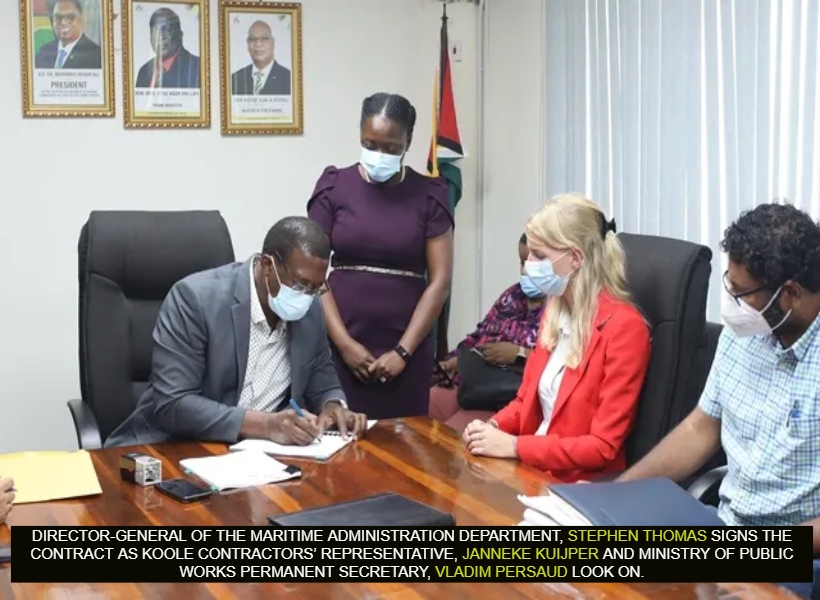 A Netherlands company, Koole Contractors has been awarded a $787.6M contract to remove three sunken vessels from the Demerara River.

The contracts were signed in the Ministry’s Boardroom on Friday by Director General of the Maritime Administration Department, Stephen Thomas, and a representative from Koole Contractors.

Minister, Bishop Juan Edghill, who joined the signing virtually, said the wrecks have proven hazardous. He explained that due to the location of the wrecks, the channel has become narrow.

“The removal of these wrecks and the dredging that is anticipated to take place, we expect that we will be able to have two-way traffic.”

Minister Edghill noted that this will complement the establishment of the new Demerara Harbour Bridge.

“This project of the removal of wrecks is also coming in tandem with us building a high span four-lane new Demerara Bridge. Which will mean that once the tide allows, you can have unhindered access into Port Georgetown 24 hours every day.”

Traversing the Demerara River will now be safer and faster for ship and boat operators as they will no longer have to maneuver around the wreckages. The project is expected to be completed in nine months with three months allotted to each wreck. The wrecks identified to be removed are the Dar B, Allana III, and Miss Elissa.

In brief remarks, Koole Contractors’ representative, Janneke Kuijper assured that the works will be completed within the contractually agreed time.

The Netherland-based Koole won the contract after a public procurement process, the Ministry said.

The removal of the three wrecks is part of a larger project the Government is undertaking to ensure the waterways are safe. There are approximately 120 wrecks in Guyana’s waterways with 16 along the Demerara River.