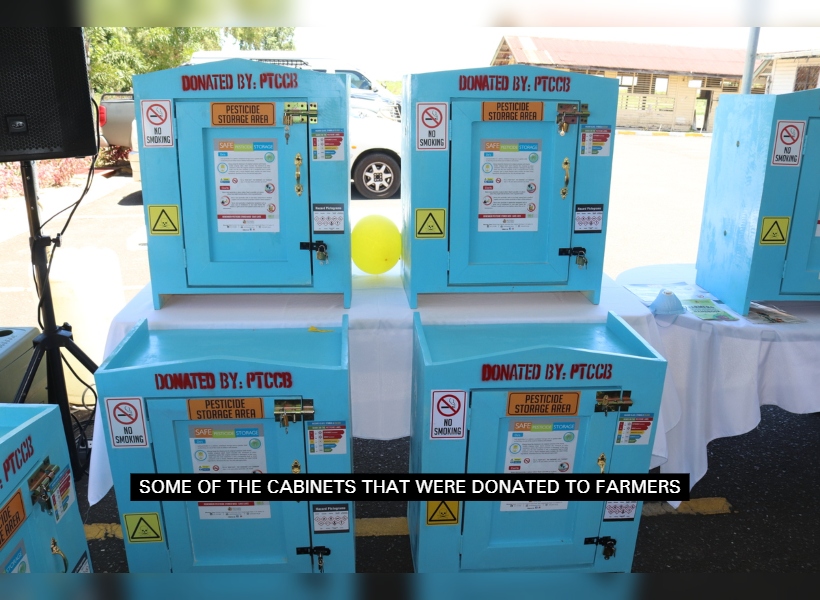 The Ministry of Agriculture’s Pesticides and Toxic Chemicals Control Board (PTCCB) yesterday distributed 100 storage cabinets to farmers across the country. The exercise which was held at the Board’s office in Mon Repos was aimed at promoting the sound use and storage of toxic chemicals within the industry.
While offering remarks, Agriculture Minister Zulfikar Mustapha was keen to note that sound chemicals management remains a priority for the PPP government, as such, the programme of distributing chemicals storage cabinets to farmers was resuscitated in October 2020.

“We know chemicals are being used across the world to enhance crops. In Guyana, our farmers have also been using chemicals to improve their cultivation. However, misuse or improper use of these chemicals…has led to deaths in several farming communities. The government, the ministry, and the Board has recognized that it is therefore important to work with the stakeholders and farmers to enhance their ability to properly store these chemicals in a safe place,” Minister Mustapha said.
The official also disclosed that the activity will be held annually and, through the Board, over 100 pesticides storage cabinets will be made available to farmers across the country.

The project which commenced in 2013, saw over 300 pesticide storage cabinets being distributed to farmers in Regions Two, Three, Four, Five, Six, and Ten by the end of 2016 and was relaunched in 2020 when Mustapha assumed the role of Minister of Agriculture.

Over the years, the Board has managed to ensure that 70% of the chemicals used in Guyana’s agriculture sector are now considered moderately hazardous and unlikely to cause issues if used according to the manufacturer’s instructions rather than hazardous or extremely hazardous.