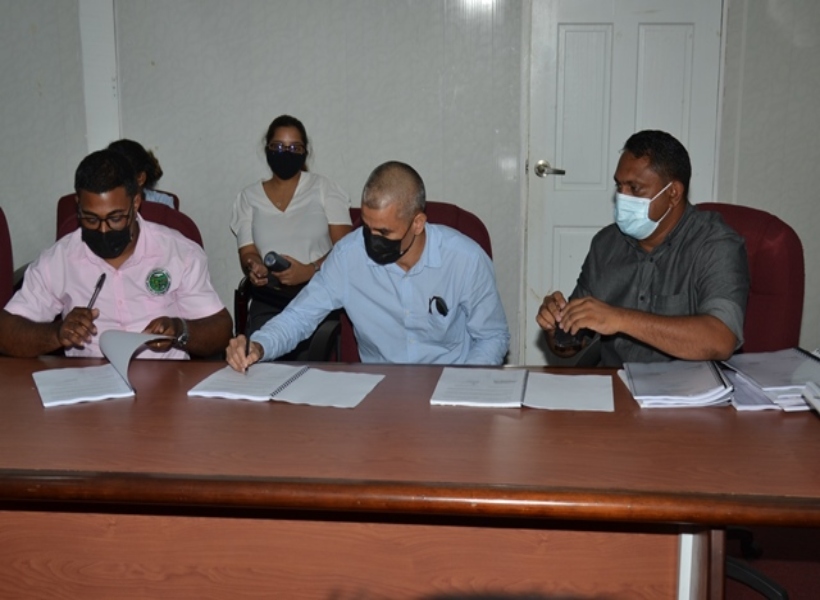 To ensure the right infrastructure is in place to mitigate the devastating effects of future flooding on the agriculture sector as well as to boost food production, the Ministry of Agriculture inked $2.7B in contracts with several contractors yesterday at its boardroom.

The 15 contracts, according to the Department of Information (DPI), were handed over to 12 suppliers.

Guyana Standard understands that a contract worth $17.9 million was awarded to CEMO to design, review and supervise the pump station at Greenwich Park/Barnwell, East Bank Essequibo while a contract totaling $685.8M was awarded to Shereaz Bacchus General Contractor for the construction of the Mahaicony Creek Right Bank Agriculture Road in Region Five.

Furthermore, VALS Construction will build a pump station at Cottage, Mahaicony, while another pump station will be erected at Black Bush Polder by Yunaz Civil and Building Construction, to irrigate Black Bush front lands. The agreements were signed at a value of $891.2 million and $978.7 million, respectively.

Also, contracts worth $108 million were awarded to Massy Motors Limited and Memorex Enterprise for the supply of two-wheel drive tractors and trailer-mounted PTO driven pumps to the Guyana Sugar Corporation (GuySuCo).

Further, Romell Jagroop General Construction Services was awarded $2 million for the supply and delivery of white sand while Memorex Enterprise will supply sand clay for $5.9 million and VR Construction will provide crusher run for $7.9 million.

Meanwhile, AAV Ragoobeer General Construction was contracted by the New Guyana Marketing Corporation (GMC) to rehabilitate the Peanut Butter Processing Packaging Facility at Karadarnau, Region Nine, and to construct the packaging facility at Kumaka, Region One, at a cost of $18.5 million. The new GMC has also contracted 3D Construction to retrofit the Peanut Butter Processing Packaging Facility at Maruanau, Region Nine, while Emagination Marketing Agency will supply, deliver and install billboards.

Minister Mustapha explained that the move to initiate the projects stemmed from several consultations by the PPP/C Administration across Guyana.

“We are putting this infrastructure in place so we can mitigate future flooding and that is very important to us. We are also trying to recapitulate and rebuild GuySuCo and there are several projects that we want to complete to ensure the agency achieves success again,” the Minister stated.