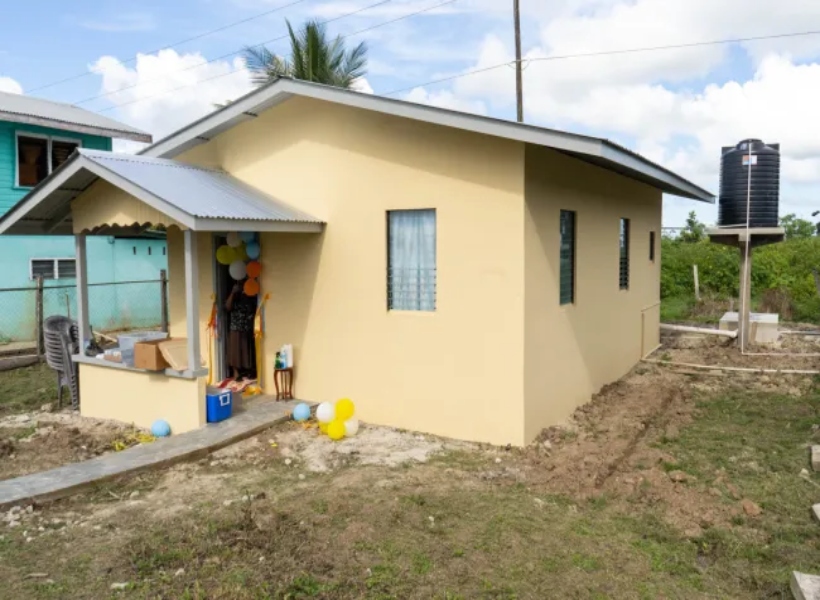 The 20 x 28 feet two-bedroom home was built by Vitality Inc. through a partnership with the Berbice Cricket Board (BCB) and the Rose Hall Youth and Sport Club.

Minister within the Ministry of Housing and Water, Susan Rodrigues, M.P officially handed over the home to Henry and her son. She was accompanied by the Directors of Vitality Inc., Abbas Hamid, Surain Sawh, Badesh Thakur and Mahiesh Ramotar.

During brief remarks, Minister Rodrigues recognised the company for the work it has been doing to improve the lives of citizens in communities across the country, as part of its corporate social responsibility.

“Any company that is committed to giving back and is committed to human development, I am more than willing to get behind…it sets the right tone and example for other companies to follow suit,” she said.

The minister said the project also complements the government’s national housing programme which aims to provide opportunities for homeownership for Guyanese.

One of the company’s director, Hamid noted that since its launch last year, the company made a commitment to build a number of homes for single mothers who are in need. Since then, one has been completed in Region One and they are in talks to construct an additional two homes this year.

Henry is an Office Assistant and seasoned member of the BCB. She has owned the plot of land on which the home was built since 2009 but was unable to construct since. In 2018 she approached President of BCB for aid in constructing a single bedroom home.

She expressed gratitude for the assistance she received, as she said, it will allow her to provide a safe and comfortable home for her youngest son.

Meanwhile, a cheque for the purchase of a pitch cover was also handed over to BCB Assistant Treasurer, Mr. Neil Rudder and Secretary, Ms. Angela Haniff, who were both present at the event. (Department of Public Information)