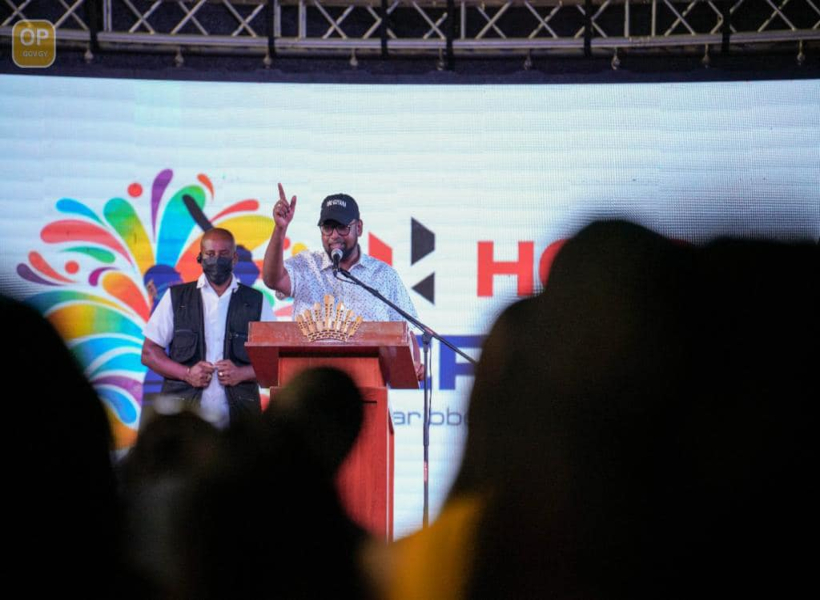 President, Irfaan Ali on Wednesday said Guyana will be hosting the Hero Caribbean Premier League (CPL) finals for the next three years with flair and pizazz.

The Head of State made this announcement as he officially launched the Cricket Carnival and CPL 2022 at the Guyana National Stadium in Providence.

“On September 30, for the first time in CPL history, the finals will be in Guyana, and not only will the (2022) finals be in Guyana, but for the next three years…”

He said that in the continuous drive to bring people together and to unify the country, there is no better way to achieve this than through sports and culture; as such Cricket Carnival in 2022 will be held under the ‘One Guyana’ banner.

The President said, “We want the entire region to be prosperous, and we are building something here to bring the region together. So, what you will see is a plan that will bring the best carnival bands in the region on the shores of Guyana in a clash of the Carnival champions from Miami, Trinidad, Jamaica, Barbados, Brazil, Guyana. We will bring them together on the shores of Guyana in the grand event in the region, the Cricket Carnival 2022.”

The inaugural Cricket Carnival will feature a regional food festival, a regional as well as an international concert and a Guyana Night, among many other exciting events. In addition to the highlight anticipated cricket matches. Spectators were also promised excitement in the stands come September.

President Ali also announced that the Ministry of Tourism is working on launching a special” CPL Cricket Carnival Cruise to Guyana” to help people who might have problems getting flights to the two-week of activities.

This impressive line-up of events planned, he added, will be a “world-class” event and will demonstrate that Guyana is “not playing third place or second place, we are playing among the best with the best, for the best.”

“That is the new culture. We are developing a willing, winning culture with great humility, with the greatest of humanity we want to play where the best play. So, CPL would not be played louder in September here. It will be played at the loudest in Guyana.”

The President also lauded the CPL’s Chief Executive Officer, Pete Russell, for his announcement that a local talent search will be launched as part of the mega event this year.

Amidst the exhilaration, the Head of State reminded of the hard work and efforts put into the development of this unique product. He, therefore, expressed appreciation to the CPL team, the Ministries of Culture, Youth and Sport, Tourism Industry and Commerce and the many sponsors and supporting units. (Press and Publicity Unit, Office of the President)