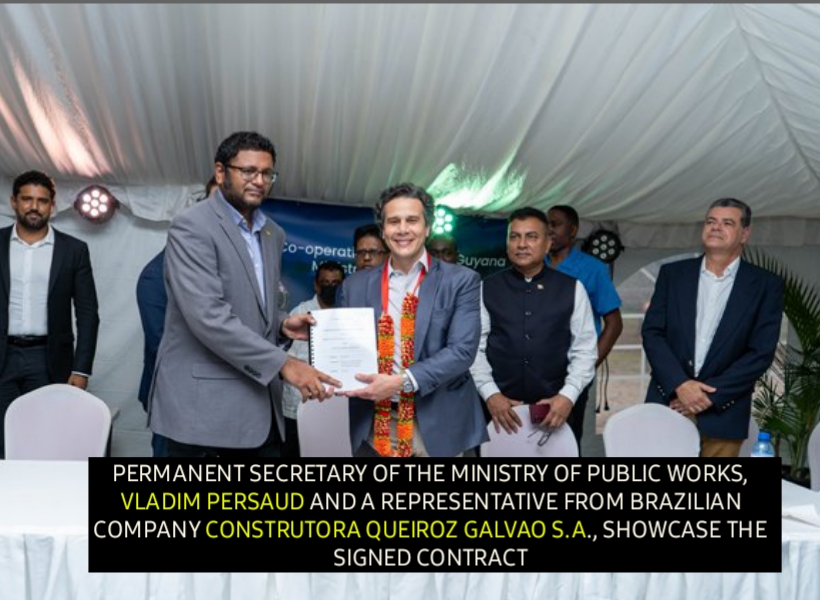 The Government of Guyana and a Brazilian contractor, Construtora Queiroz Galvao S.A., on Friday inked a contract for the construction of the Linden to Mabura Road which is being funded by the State, the Caribbean Development Bank (CDB) and the United Kingdom, at a total cost of US$190M.

During his feature address, Senior Minister with responsibility for Finance in the Office of the President, Dr Ashni Singh pointed out that the Linden to Mabura Road was part of a more integrated plan of the People’s Progressive Party Civic (PPP/C) Government which was long in the making and which comprises several transformational projects such as a new high span bridge across the Demerara River and the bridge across the Corentyne River linking Guyana and Suriname.

The economist said the development of this all-weather road will bolster trade and commerce to unlock the vast opportunities in linking Guyana with Brazil. He said the improved road network will also support ease of travel, the transport of goods, and the provision of services between hinterland communities and Georgetown.

In February last, the Caribbean Development Bank (CDB) issued its no objection for negotiations to commence with the most responsive bidder, Construtora Queiroz Galvao S.A. from Brazil being awarded the contract for the upgrading of the road.

This project is the first link of the highway between Linden and Lethem and is the first segment of the approximately 450 kilometres roadway.
The US$190 Million Linden to Mabura Road project comprises a US$112-million loan from the CDB, a grant of £50 million (US$66 million) from the Government of the United Kingdom via the CDB-administered United Kingdom Caribbean Infrastructure Fund (CIF), along with US$12 million provided by Government. It is also the largest single project ever financed by the CDB and marks its largest geographic ‘footprint’.

The bids were carefully scrutinized and evaluated by a team of local engineers. After a thorough evaluation process involving engagements and consultations with the Caribbean Development Bank, Consultant Mott MacDonald and other specialists, Construtora Queiroz Galvao S.A was determined as the most responsive bid indicating full compliance with all Environmental, Social, Health and Safety requirements.

The CDB indicated its concurrence with the recommendation of the Guyanese evaluation committee and issued it no-objection to commence negotiations with the winning bidder.

Guyana Standard understands the road will be 121 kilometres long with a 7.2 metres wide carriageway. It will feature a cycle and pedestrian lane measuring 2 metres wide, along with 10 bus stops outfitted with ramps for persons with disabilities. A number of bridges and culverts will be replaced. Some 123 lights will also be installed.