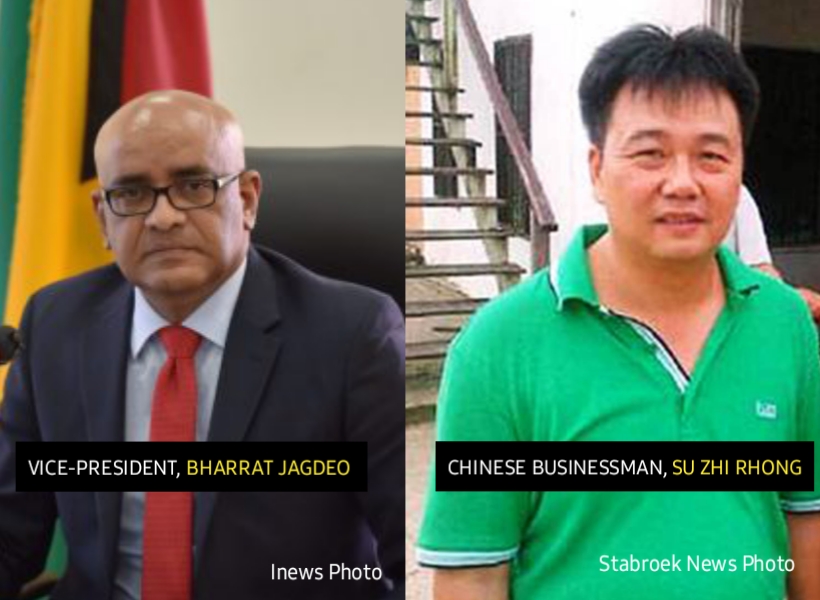 Guyana’s Vice-President (VP), Bharrat Jagdeo has signaled his intention to sue his friend and tenant, Chinese businessman, Su Zhi Rhong, who reportedly told an undercover VICE News reporter that he accepts bribes on behalf of the VP.

Su Zhi Rhong had allegedly brought the undercover reporter, who was posing as a Chinese businessman to Jagdeo’s home to discuss a Hotel and Casino venture. It was reported that the undercover journalist then sought to have Jagdeo come aboard and to lend support to the project. However, Jagdeo refused, saying that he is in government and, therefore, does not get involved in financial arrangements. He, instead, said that Su Zhi Rhong is his friend, and he gets the support he needs as a businessman. It is this comment that the Opposition has labelled a smoking gun, solidifying its claim that Jagdeo is indeed involved in a plot to giveaway state resources in exchange for a payout.

Jagdeo’s threat of litigation is a consequence of Su Zhi Rhong implicating him (Jagdeo) in a bribetaking scandal that involves government projects. But before the episode was aired last Sunday, Jagdeo was grilled by the Vice News and was asked point-blank if he took bribes, to which he responded in the negative, unaware that the “sting operation” had already been conducted.

The reporter then told Jagdeo that Su Zhi Rhong had named him as the government official who must be financially appeased before the green light is given.

During a press conference today, Jagdeo said that he feels vindicated because even at the place where he is off-guard – his home – the news outfit could not “catch” him taking a bribe. He said that the whole country saw that he in no way acceded to taking money or any other form of inducement in return for government-granted largesse.

Nevertheless, despite not acquiring a smoking gun, Jagdeo opined that his reputation most definitely took a hit, and he will not hesitate to rain litigation down upon his comrade, whom he said, has since gone out of reach. He also plans to “throw out” Su Zhi Rhong, who lives on his property in the neighbourhood.