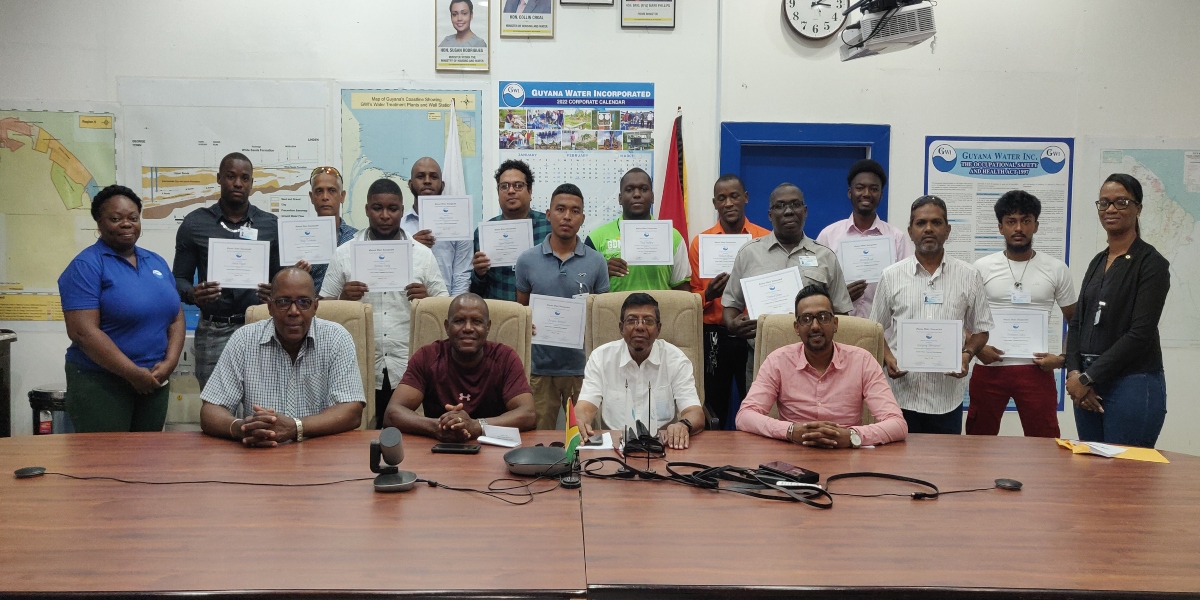 The Guyana Water Incorporated will embark on an apprenticeship programme to aid its plans to improve coastal water quality via the establishment of 13 new water treatment plants and 10 in-line treatment systems.

This was announced by GWI’s Chief Executive Officer, Shaik Baksh, who was at the time addressing graduates of the Company’s Plant Operators Level II Training Program.

Baksh explained that the on-the-job training for the Operators will eventually lead to upward mobility, thus contributing to human resources development at all levels within the company.

The apprenticeship programme on the other hand, will aid in knowledge-sharing and the filling of new positions that will become available.

The CEO also acknowledged that there is a plea for water free of high iron content on the coast. To this end, he posited that the Government’s investment in the realization of these new water treatment plants will help to significantly improve the quality of water citizens receive.

He told the graduates that their role as Plant Operators is important in ensuring the functionality of the plants and the distribution of clean water to residents.

He noted, too, that GWI is conducting a study that entails the use of surface water. These sources are the East Demerara Water Conservancy, Boerasirie Conservancy, Five Mile in Bartica and the Dakoura Creek in Linden. The utility is also eyeing twenty-seven springs in Linden to be put to use.

GWI’s Executive Director of Human Resources Management & Development pointed out that 17 persons successfully completed the training program, which was held for a period of one year.

Wendell Jeffery, a Director on GWI’s Board, told the graduates that the training they’ve received is a result of the foresight of the Board and Management of the company.

He told the operators that they have an important role to play in the development of Guyana’s water sector. He reminded them that citizens across the coast are depending on them for a safe, clean and timely water supply.

He dubbed the training programme part of history in the making, as the company moves towards expansion.

A second batch of Plant Operators is expected to commence training later this month and the programme is slated to last for a period of six months.