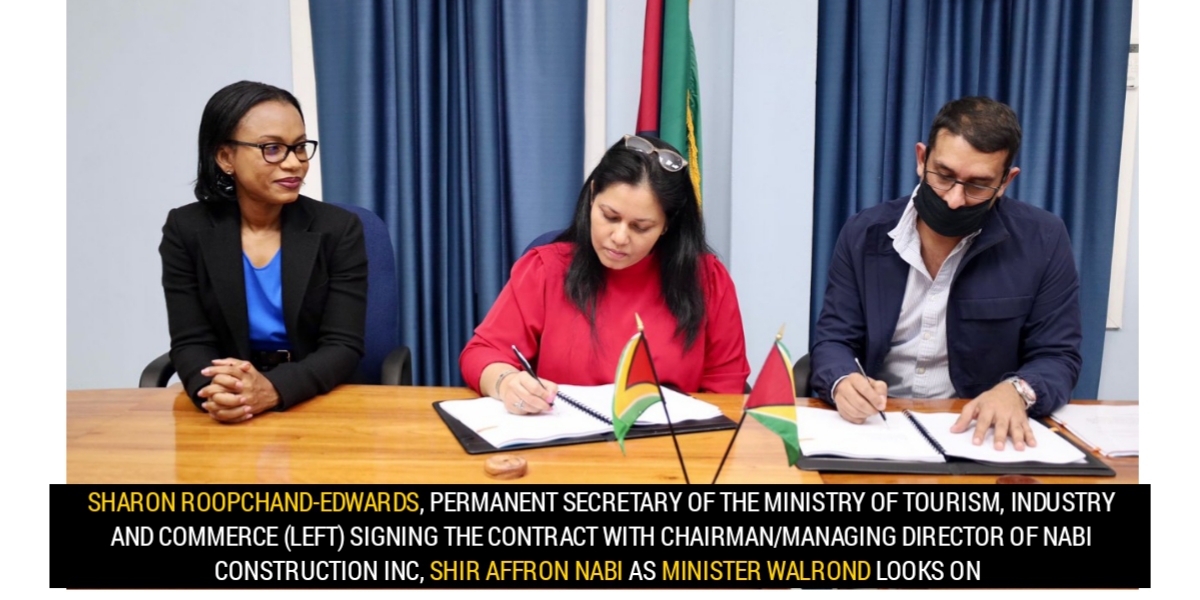 The Government of Guyana (GoG) through the Ministry of Tourism, Industry and Commerce, today, signed a GYD $2.5B contract with NABI Construction Inc., for the “Construction of the New Laboratory Facility for the Guyana National Bureau of Standards”.

The new lab facility will be located in the Sophia Exhibition Complex. The recent oil and gas discoveries have produced several changes in the structure of Guyana’s economy. Consequently, the role of the Guyana National Bureau of Standards (GNBS) has become more critical to both the private and public sectors, as the demand for its services has increased substantially, especially in the areas of business development, metrology, and training in standards for Guyanese firms.

The Government has acknowledged that the current laboratory infrastructure at the GNBS requires upgrading for the provision of these much-needed services to support economic competitiveness.

Improving the GNBS’ infrastructural facilities allows the agency its full capacity to function and support economic diversification, innovation, and access to markets by Guyanese businesses.

Construction of this new state-of-the-art facility, will equip the GNBS with international standard laboratory facilities to assure reliability; adequate space to perform tests for consumer protection and certifying production standards; increased calibration capacity for temperature, moisture, pressure, force, volume and electricity; adequate equipment and the
ability to maintain its ISO accreditation; and sufficiently trained staff to perform tests and calibrations and maintenance of this equipment.

The Government of Guyana, with support from the Inter-American Development Bank, has ensured that this project which is expected to be completed within the next 18 months, will
allow the GNBS to deliver on its mandate in a sustainable way while contributing to Guyana’s economic competitiveness.
The Ministry of Tourism, Industry and Commerce through its National Quality Infrastructure Project will spearhead the management and oversight of the construction project.