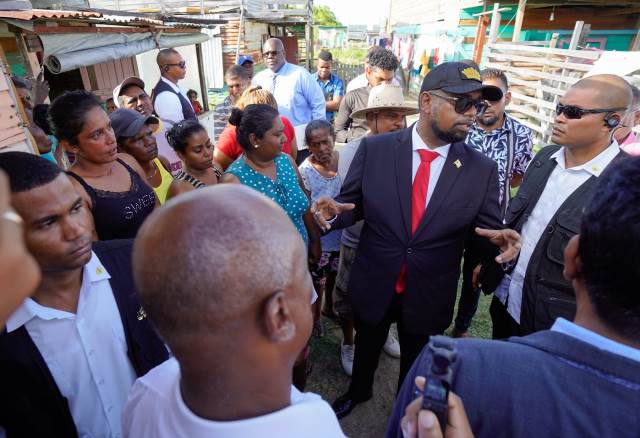 Families of three fishermen who recently lost their boats in Suriname waters have been assured that the government is doing all it can to address the issue.

This assurance was given by President Dr Irfaan Ali during a visit to Annandale, East Coast Demerara on Friday.

The matter, he said, is going to be taken to the highest level.

In August, the fishermen’s boats and fishing equipment were seized after they were found to be fishing in Suriname waters.

Reports in the local media indicated that the three fishermen were also required to pay a fine for their actions.

President Ali also said the government is not ruling out taking legal action to settle the matter.

“We have been fighting this case from the time they brought it. What we know for sure the officials said they sold this boat out. I told the Attorney General we will work now, if we have to go legally against them, we will go legally against them because there can’t be any system where you can just seize a boat and they sell it the next day,”the president told concerned family members.

On Wednesday last, the president said representatives of Guyana and Suriname are scheduled to meet to iron out issues surrounding granting 150 coastal fishing licences to Guyanese fishermen.

The issuing of the licences was an agreement coming out of a four-day official visit of Suriname’s President Chandrikapersad Santokhi to Guyana back in 2021.

The government has also condemned Suriname’s harassment of Guyanese fisherfolk in Suriname waters in a recent statement.

“The Government of Guyana condemns, in its strongest possible terms, the most recent harassment being meted out to our Guyanese fisherfolk by the Surinamese government, inclusive of its failure to grant licenses to our fishermen in keeping with a commitment made to His Excellency, Dr Mohamed Irfaan Ali, President of the Cooperative Republic of Guyana on 26 November 2020, during a visit to Suriname,” the government said in the statement. (Department of Public Information)