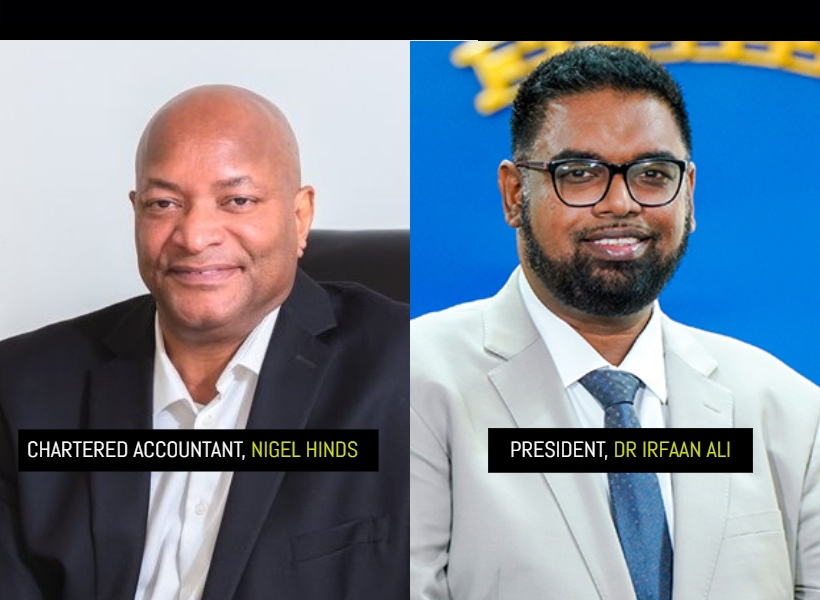 The statement, “I am not racist; some of my friends are black” is popularly recognized, particularly in the United States, as a defense mounted by those who cannot otherwise demonstrate—either by action or policies—that they do not practice racism. It is quite the cliché.

This reality is relevant to sentiments expressed by Nigel Hinds. The chartered account and political activist is calling out President Dr. Irfaan Ali over comments made on Sunday in Mocha. The President visited the village to commission the rehabilitated Burnham Boulevard. Hinds believes that while there, His Excellency acted in a condescending manner and perpetuated an age-old stereotype of black people.

DemeraraWaves reported that, during a visit to the predominantly black village, President Ali issued a public challenge to critics of his government to prove that it is practising racial discrimination.
According to the report, urging an Afro-Guyanese woman to stand while telling the audience that she has been working in his home like a family member, the President remarked that “I don’t need anyone to lecture to me.”

Hinds said that he interprets the President’s statement to mean, “I’m not racist, I have a black employee.” Hinds told Guyana Standard that it is important for the President to know, “that’s not how it works.”

He added, “the arrogance and insensitivity of asking the African woman to stand is so condescending in the circumstances.”
The President is also reported saying, “I challenge anyone to do an audit and tell me where the sensational and stupid narrative of marginalisation comes from.”

He noted that marginalized people suffer and are disadvantaged by racist practices and policies. Hinds said that this is a global reality and Guyana is not the exception.

Hinds further pointed to the DemeraraWaves article which stated, “In clear reference to the opposition coalition, the President urged the gathering to ignore those in the society who are playing on the psychological and mental and that will get us nowhere.”

In response to this, the political activist noted, “the leaders of the opposition are being associated with being stupid, because of their statements. The most prominent words for disgracing, demeaning and diminishing Africans for several centuries are “stupid and lazy”.

Hinds is of the opinion that President Ali needs to apologize immediately for “putting together such racist, demeaning, disrespectful and hurtful narrative against African-Guyanese.”
He added that no audit is needed to determine that the current administration is by order of magnitude; discriminating more than any previous PPP administration against African-Guyanese, in both the private and public sector.

“Ali is telling the African-Guyanese don’t believe what you see, have experienced and are experiencing. It seems to me that these are by far the worst statements of Ali’s Presidency. This is not the Irfaan Ali I know,” said Hinds.