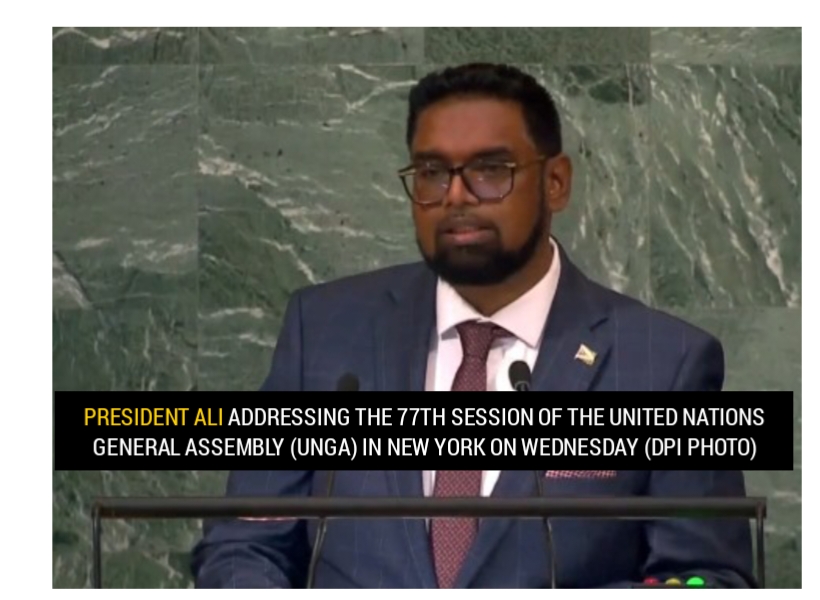 Guyana will continue to champion the peaceful resolution in the territorial controversy with neighbouring Venezuela.

He said government will not support any use of force as a means of settling any dispute or controversy among nations.

“Guyana does not condone or support the threat of, or use of force in relations between states or in the resolution of disputes. Consistent with the Charter of the United Nations, Guyana subscribes to the use of peaceful means to settle disputes,” he stated.

The head of state highlighted that even though Guyana’s own land is being threatened, the government will not sway from the advice proffered by Secretary General of the United Nations António Guterres, at the opening of the event on Tuesday.

“[We remain] committed to making the most of every diplomatic tool for the pacific settlement of disputes, as set out in the Charter of the United Nations,” Guterres was quoted as saying.

The president noted that Guyana is committed to a judicial settlement in the matter, one, which he hopes could come soonest.

Guyana is seeking to obtain a final and binding judgement that the 1899 Arbitral Award, which established the location of the land boundary between then British Guiana and Venezuela, remains valid and that the Essequibo region belongs to Guyana and not Venezuela. (Department of Public Information)