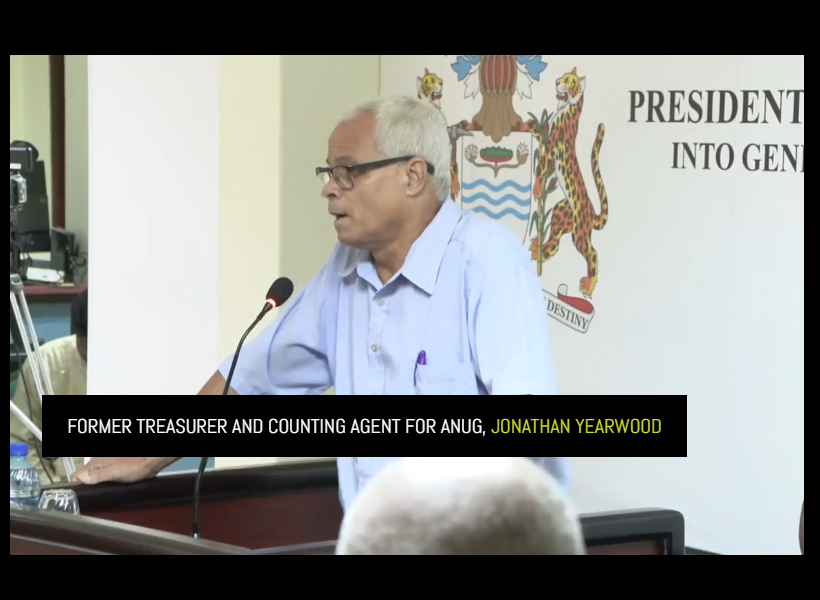 Former Treasurer and counting Agent for the A New and United Guyana (ANUG) Party, Jonathan Yearwood took the stand on Monday as the Presidential Inquiry into the 2020 Regional and Regional Elections continued.

Yearwood’s testimony to the commission focused on what occurred on the night of March 5, 2022 when a flash drive was reportedly removed from a tabulation device by a Technician attached to the Guyana Elections Commission (GECOM).

Yearwood recounted that while agents and observers were comparing and contrasting data presented to them in the tabulation room, political party agents, including himself, realized that there were several inconsistencies with the data presented by the GECOM employee, Enrique Livan.

He noted that Livan’s data, which was reportedly on a document, revealed more inconsistencies as they were being presented. He noted that pandemonium erupted after Livan reportedly continued presenting data without verifying the agent’s concerns.

He further noted that the data was then presented on a large screen. The data still however possessed inconsistencies. According to Yearwood, Livan allegedly didn’t take the concerns seriously. “We told him that those are not the numbers we have… Basically, we were just ignored and they tried to continue with their process,” Yearwood stated.

The witness said that after five Statements of Poll were read, the process stopped. He recounted that after party agents began to reject the data, Livan removed the flash drive and proceeded to a room where there were two other persons.

“We became so vociferous. We were so upset, we were all tired. And we felt like wool was being pulled over our eyes. They eventually stopped and left the room,” Yearwood recounted.

The witness said he was made privy to certain information and he and other agents rushed into a room where Livan and two other persons were located. He recounted that Livan was sitting at the computer and was observed to be working on a document.

“He was accused by party agents of working on the same document and he denied that he was doing anything wrong… When the police came, he folded his arm and placed it on the desk,” Yearwood said.

Yearwood shared that the then Divisional Commander Assistant Commissioner of Edgar Thomas told the agents if an investigation were to be launched, nothing could be done until the investigation is complete.