Home News Is there tolerance and acceptance for the LGBTQ+ community in Guyana? 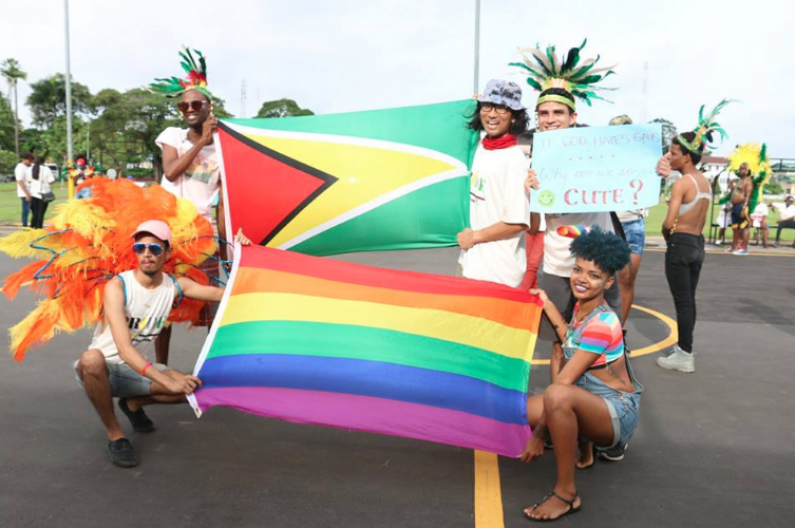 In Guyana, homosexuality is considered illegal. This is due to archaic legislation which prohibits certains acts of affection for the same sex.

Under the Criminal Law Offences Act of 1893, acts of ‘buggery’ and ‘gross indecency’ are considered criminal. These provisions carry a maximum penalty of life imprisonment. Only men are criminalized under this law.

These laws were inherited from the British during the colonial period. Luckily, these documents are not enforced. At the same time, lawmakers do little to ensure at least basic human rights are given to the LGBTQ+ community.

There have been several attempts through Parliament and the judicial system for law reform which would start by first granting basic human rights and respect for the LGBTQ+ community. Despite calls from the United Nations to end sexual orientation discrimination, the government’s current and in the past, continue to walk on eggshells with the issue.

About four years ago, the then Minister of Foreign Affairs Carl Greenidge told the press that the government was exploring the option of a referendum to decide whether these archaic laws should be changed. With threats from the Christian Community and other public opinions, the issue was thrown into the sea of forgetfulness.

But with any journey, there is always the first step.

The Caribbean Court of Justice two years ago struck out one of Guyana’s archaic legislation which prohibited cross dressing. This was done on the grounds of freedom of expression and changes of similar legislation in the Caribbean region and globally.

In addition, ranks of the Guyana Police Force were trained on better relations with the gay community and also global standards which would help and take reports from the community more seriously.

But what about public perception of the gay community? And most importantly, how does this affect possible further changes in legislation which could see the end of discrimination from certain sections of society. Local Consultants, RMK Consulting Enterprise, had conducted a study on the perception and attitudes towards LGBT persons in Guyana.

More than 1000 persons were interviewed in the study which sought to have an understanding as to how much tolerance and acceptance Guyanese have towards the LGBTQ+ community.

The findings revealed that 37.9% of the interviewees tolerate gay persons while another 34.5% have accepted they know who is gay. In total, the report found that 72.4% of Guyanese expressed positive attitudes towards the gay community.

But there is still a section of the population who expressed a dislike towards the gay community. Older persons between the age of 51-70 were the least accepting followed by middle aged persons between 31-50. It seemed the younger populace were most tolerant of the community.

The report indicated that the population when asked whether Government should legally protect the rights of persons who are are either gay, lesbian or transgender, responded positively. It said 49.6% of the population responded in favour of legislative changes as against 34.3% who say it should not be a priority.

What does this mean for Guyana?

To have a better understanding of this report, the Guyana Standard sat down with Human Rights Coordinator of SASOD, Melina Harris.

Harris explained that the results of the report are clear that Guyana’s current laws do not reflect the values of Guyanese. She noted that with the report, the administration should not have an excuse to make the necessary changes needed to remove laws that discriminate against the community.

“Most Guyanese believe in treating their LGBT neighbours with respect – and we hope that these results send a strong message to decision makers that Guyana is ready for them to take action to better protect LGBTQ people and their families. In fact, when asked specifically as part of this poll half of respondents (49.6%) believe that it should be a priority for the government to legally protect LGBT persons,” Harris said.

The Coordinator was asked how important is this poll for the community and the still lingering issue of discrimination. Harris expressed the view that the report was positive. She said there is still a long way to go.

Harris responded, “While discrimination is still a reality for far too many LGBT Guyanese, the results of this poll offer hope – that when we tell our stories, and talk to our neighbours, family and friends, we can change hearts and minds and make Guyana a more inclusive and welcoming place for everyone. These numbers show us that we can and have made definitive progress in accepting LGBTQ persons.”

Harris was also asked whether SASOD will be engaging lawmakers again, about possible legislation changes, especially since law reform has begun. She noted that this is of top priority.

“SASOD and our allies will make sure that every member of Parliament and key decision maker in government has seen the results of this poll and understands the clear trend towards acceptance of LGBT people in Guyanese society,” Harris said.

She continued, “We’ll continue sharing stories with lawmakers of Guyanese of all backgrounds – gay and straight, Afro and Indo Guyanese – who believe in treating everyone with respect, and we hope that lawmakers will listen to their stories and act on the will of most Guyanese who want their LGBT neighbours to be afforded respect and protection under the law.”

In conclusion, the report highlights the fact that there is no threat to public decency. In fact, 71.9 percent of the interviewees agreed to have proposed legislation in Guyana that would ensure protection against discrimination for gay and transgender people in the workplace. With the figures outlined in the report, law reform is direly needed to address issues affecting the gay community.