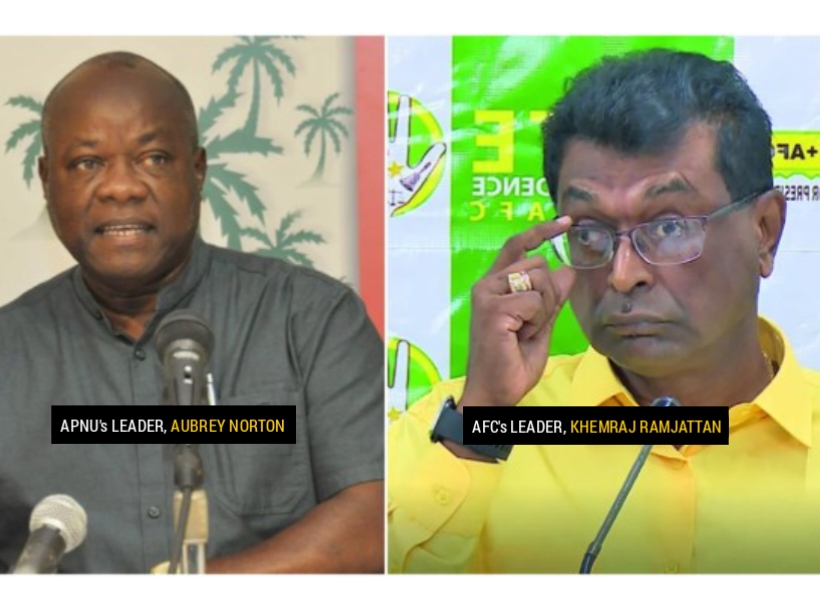 Leader of the Opposition, Aubrey Norton has refuted claims made by the Alliance for Change about internal issues between the two political parties. This was revealed during a press conference on Tuesday.

Last week, when asked by the Guyana Standard about the reason for leaving the Coalition, Leader of the Alliance for Change, Khemraj Ramjattan had said that there were internal issues between the two parties.

When further questioned about what were some of the issues, the matter was diverted to Executive Member Cathy Hughes, who also withheld a direct answer. Instead, the party posited that the leave was one of goodwill.

At their weekly press conference on Tuesday, this news outlet attempted to get APNU’s side of the story. Instead, Leader of the Opposition Aubrey Norton dispelled the claims, citing that at a recent meeting with AFC, just days ago, everything seemed normal.

“I am not aware of any issues… There are different elements in the AFC that are talking. As far as I know, we had a cordial meeting and we agreed on some joint things,” Norton said.

The two sides over the years have shared different opinions on national issues such as the Oil and Gas sector, appointment of Regional Heads, Leadership and even the betrayal of one of its own members in 2018 during the tabling of the highly publicized no- confidence motion.

While these issues may have been contributing factors to their pending separation, Norton attempted to provide some amount of perspective to the media with regards to coalition politics; at the same time not addressing the issues.

Meanwhile, Executive Member of APNU Ganesh Mahipaul also supported the notion that there aren’t any issues between the two political sides. He instead told the media that the separation may be a sign of a new agreement between APNU and the AFC.

“I am not aware that the AFC has detached itself or is detaching itself. From my communication with members in the AFC, I am aware, and knowing also what happens in the APNU, that the agreement between the APNU and AFC, it will expire on 31st December 2022 and what was said to me was that, there obviously would have to be a new agreement, a new discussion, so there can be a new friendship,” Mahipaul said.

Last week, the AFC announced that at the end of 2022, it will officially leave the Coalition. The Party said that while they are not participating in the upcoming Local Government Elections, it will use the time to regroup and restrategize for the 2025 General and Regional Elections.