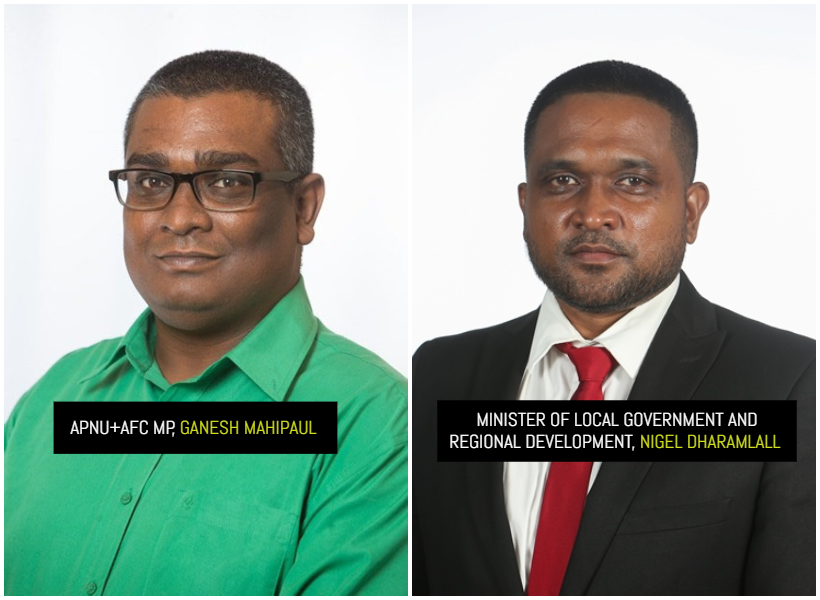 APNU+AFC’s Ganesh Mahipaul yesterday told the National Assembly that Ministers of Local Government, Nigel Dharamlall and Anand Persaud, whom he described as, ruthless, political hacks, are failing in their mandate.

Mahipaul was among the first to make contributions to the ongoing debate. Being the Shadow Minister of Local Government, Mahipaul spent a great deal of his time examining the shortcomings of that ministry.

He said it is a crucial aspect of the nation’s governance structure, therefore, it is imperative that it is led by competent, professional, and empathetic ministers. He said instead, the nation is stuck with “two ruthless, radical, political hacks who are hell-bent on causing chaos and confusion within the ministry and at all levels of local government.”

Mahipaul said that in 2022, that ministry received a staggering $10B in funding and, after supplementary sums, spent over $11.5B. He said that despite this significant allocation, the ministry failed to meet key objectives and deliver on vital projects.

Supporting his claim, Mahipaul said that in 2022, the ministry was supposed to train some 665 staffers in specific areas, but only 155 were trained.

Additionally, the Local Government Sector Strategy and Sanitation Sector Plan were not completed. He also highlighted that no monitoring and evaluation framework was established.

Further, Mahipaul said that the ministry fell short on infrastructure development, with 14 new projects planned but only 9 completed. He said too that 29 existing infrastructure projects were planned for improvement but only 7 were improved.

Even further, Mahipaul said that none of the Local Democratic Organs (LDOs) saw the implementation of ISM technical standards for waste management, and none of the 6 regions completed their Regional Strategic Plan. The opposition MP said that this reality is a clear indication of financial mismanagement and raises serious questions about the Ministry’s ability to effectively use the funds allocated.

Mahipaul said that despite the wasteful spending last year, the ministry is now seeking a staggering $19B.

He said that Guyanese deserve transparency and accountability for this level of underperformance in 2022. The parliamentarian said citizens must be provided with answers as to how the funds allocated in 2022 were spent.

Mahipaul also singled out Dharamlall, saying that he should take responsibility for his ministry’s failure and resign.

He told the House, “I can confidently say that none of them were consulted on the creation of this budget, despite the government’s rhetoric of ‘One Guyana.’ I have received numerous complaints from Regional Executive Officers, who are politically aligned with the People’s Progressive Party, about being instructed to include certain projects in this budget without their input or consent.”

The opposition MP also claimed to have been told by a Regional Election Officer that he can no longer handle the pressure of being dictated to by phone calls and Whatsapp messages from Persaud and Dharamlall.

Mahipaul called on both Persaud and Dharamlall to try to be humane in their interactions with persons who are answerable to them.