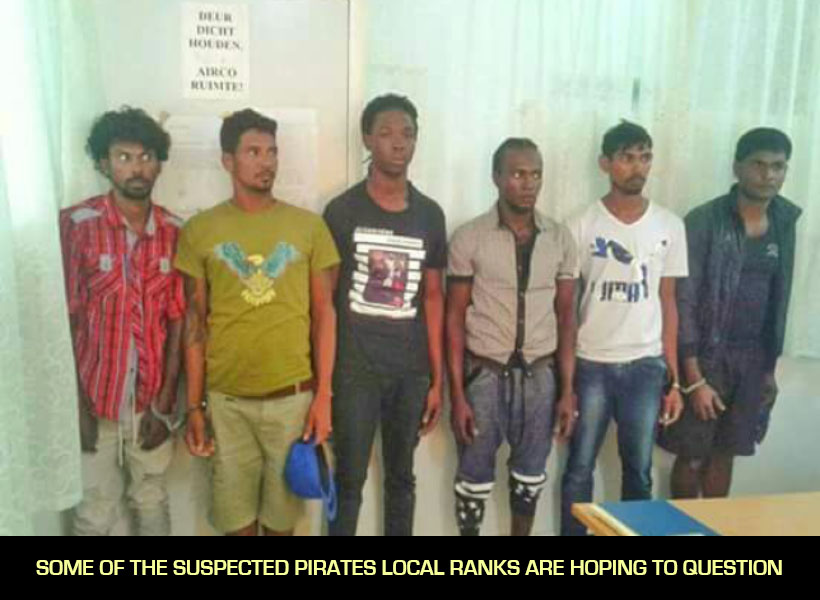 Investigations into the April 27th pirate attack that occurred in Suriname waters have come to a standstill.

This is as local law enforcement officers await permission from its neighbouring counterpart to question the 15 suspects held shortly after pirates stormed four vessels, leaving 11 Guyanese fishermen missing and four dead. There are four survivors.

The Guyana Standard has been informed that investigators have received information that there is more than one mastermind in the deadly rampage, which was allegedly a revenge attack for the slaying of Suriname-based boat owner, Somnauth Manohar.

To confirm the information received, a police source said yesterday that they need to interrogate the suspects who have been held in Suriname. However, the green light has not been given as yet, resulting in the case being put on hold.
“We are hearing that there are other suspects in Guyana who planned the attack. Some of them are relatives of Manohar but to confirm this information and find these persons we need to question the suspects in Suriname,” a police source said.

This news agency has been told that when the request was made for local ranks to question those held in Suriname, the police in that country said that they needed to seek advice first. It is unclear how long this will take.

“The longer they take to give us this information, the longer it will take for us to close this case,” the source indicated. Somnauth Manohar was killed in a drive-by shooting in Paramaribo in March, last. It is suspected that his killing was orchestrated by fishermen, who believed that he and his gang had killed a boat captain during another piracy attack dating back to February, last.

Somnauth’s brother, Nakool Manohar, 39, has since been charged and remanded to prison. The 39-year-old is said to have own more than 40 fishing boats with each worth about US$40,000.

Some of the suspected pirates local ranks are hoping to question