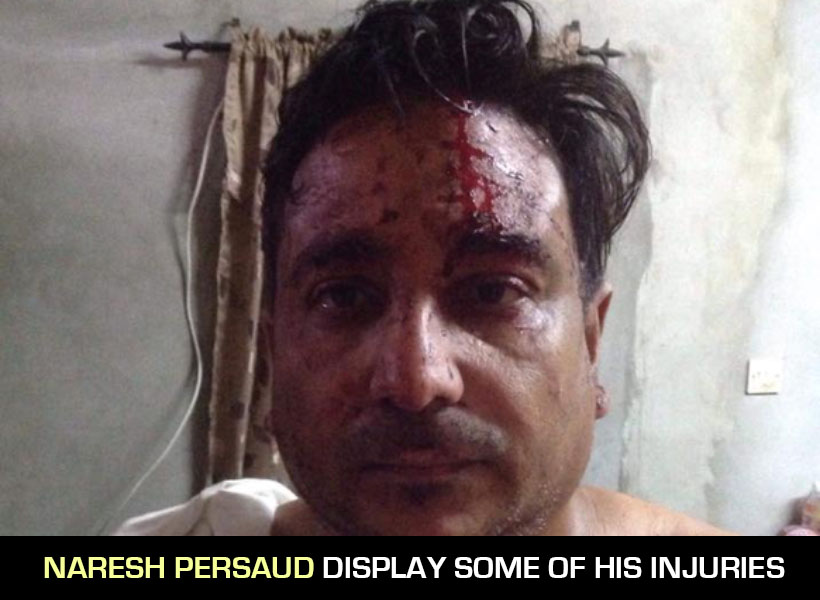 A 38-year-old shop owner, her husband and 19-year-old son were tied and beaten around 02:30 hrs this morning (May 16, 2018) after three gun-toting bandits entered their home by cutting the zinc on the roof.

The victims have been identified as Samantha Phakurdeen; her husband, Naresh Persaud, their son, Sachin Persaud and daughter, four-year-old Nirvani.

The masked men escaped with cash, jewelry, phones and a laptop after beating and tying Phakurdeen and her husband as their daughter looked on. While the bandits did not harm the little girl, they didn’t spare the couple’s teenage son.

The Guyana Standard was told that the suspects kicked down the teenager’s bedroom door and dealt him several blows about the body. They even threatened to kill him if his parents did not hand over all their valuables.

The family operates a shop which is attached to their home. This morning, the three masked men, cut a piece of the zinc from the roof of the shop and then made their way into the house. Once inside, they pushed open the couple’s bedroom door. “We were sleeping and when they come in the room, they come to my husband and start choke he and he scream and wake me up,” Phakurdeen said.

The terrified woman added that the bandits, two of whom were armed, then pushed her husband on the floor and gun-butted him several times. “They started kicking we on the floor and then they tie up we and deh beating we all the time while asking for the money and gold.”

Eventually, the gunmen were directed to the family’s cash and jewelry but they continued trashing them, claiming that it was not enough. “When they get the money, they say, ‘no, no we don’t want that, we want more’ and one of them say this shop big so they got to get more money,” Phakurdeen said .

The ordeal lasted for about 45 minutes. “I don’t know if rain was falling but we didn’t hear anything. I just know bandits in the house when my husband started screaming because they went to him first. We didn’t hear when they cut the zinc or anything.”

She explained that her family has been operating the shop for the last five years and was never robbed until this morning.

The matter was reported at the La Grange Police Station but up to press time there were no suspect.