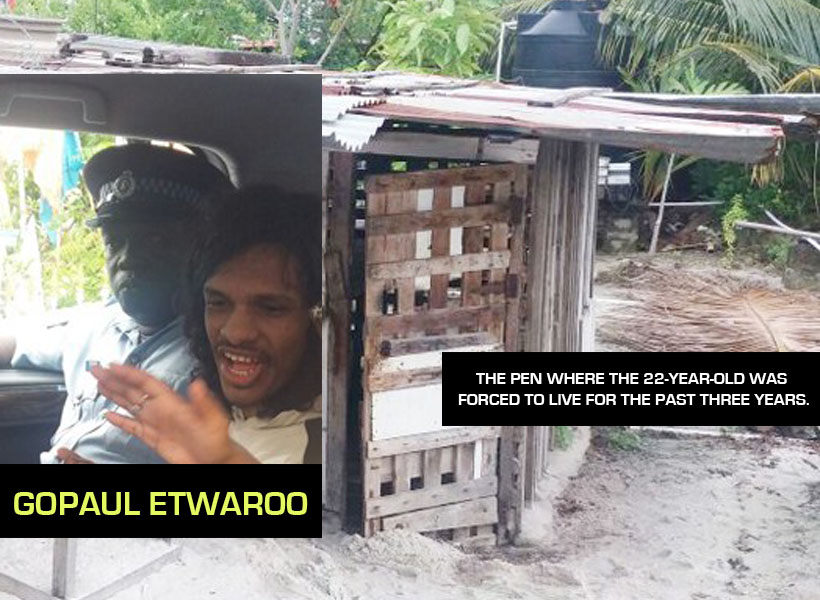 Police have arrested the father and step mother of 22-year-old Gopaul Mohan, who was forced to live in what is being described as a dog pen for the past three years.

On Friday, the young man was rescued by the Guyana Police Force and the Guyana Women Miners Organization (GWMO).

Mohan Etwaroo and his wife Parbattie are currently in police custody at the Prashad Nagar station.

Guyana Standard understands that Parbattie was arrested over the weekend and her husband was taken into custody today.

Gopaul was locked in the small wooden pen by his father at the back of their Block ‘Y’ North Sophia home.  There were no mattress or blanket for him to cover and he used three plastic bottles that were cut in half as eating utensils.

The Guyana Standard was informed that the pen was locked from outside, making it impossible for Etwaroo to exit.

When he was rescued, the young man could not stand straight and could barely speak.

The 22-year-old man was rescued after neighbours reported the condition he was living in to the police. In an interview with the media, his step mother said that they placed him in the pen because he would destroy household items.

Parbattie explained that she gave him clothing every week but he usually destroyed them. She said a mattress was given to him when he was first taken to the pen but he also destroyed that. “Everything we give he, he does destroy so when he destroy the mattress we leave he to sleep in the pen just like that,” she said.

Asked why the young man was not placed in a government home rather than the pen, Parbattie said that she spoke with her husband multiple times but he refused to listen. She said that she even asked for Etwaroo to receive some sort of treatment but claimed that her partner did not pay attention to her.

She said that she found it strange that the police would visit her home to remove the young man when official from a government ministry visited their residence and gave permission for the 22-year-old to live in the pen. “The bottom of the pen was share mud and the people (Ministry official) tell he (Gopaul’s father) that he has to build it up because the place ain’t too healthy to keep he,” the woman told police ranks on Friday.

She went on to say that her husband then modified the pen and Etwaroo was taken there to live.

One neighbour told media operatives that the young man could be heard crying in the nights. “When the rain falls, he gets wet and there is nothing there for him to cover.”

The furious woman added, “I don’t understand how a father can have his own flesh and blood living like an animal. When that boy came out the pen, he was walking like a monkey. He didn’t behave like human at all.”

After the young man was removed from the pen, he was taken to the Georgetown Public Hospital Corporation for medical evaluation and then taken to the Dharm Shala, a home for adults.

Guyana Standard understands that when the young man was taken to Dharm Shala, he was relieving himself anywhere. But in just a matter of days, he improved.

A sources said, “When he arrived on Friday he was doing his business all around, but he is now going to the washroom.”